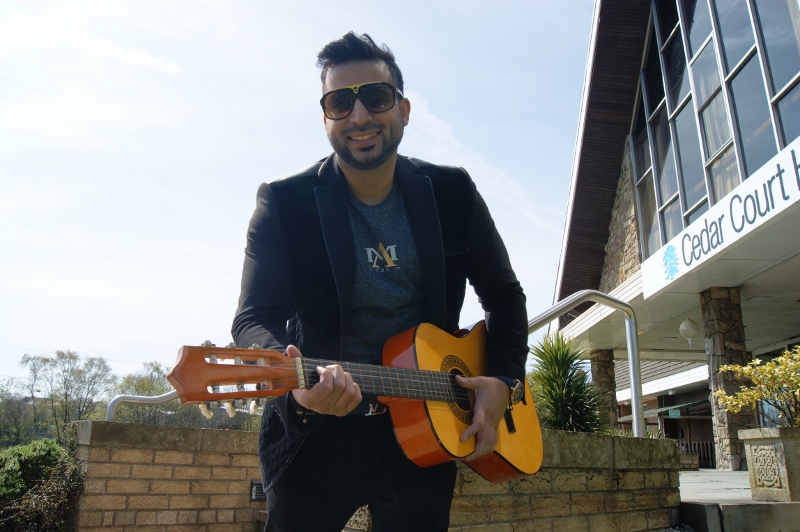 An up-and-coming music star from Huddersfield is combining his passion for singing with his commitment to charity work as he prepares to launch his first official single.

Aidan Mufti, who goes by the name Aidan M, will donate all proceeds from his song Waaddaa – meaning ‘promise’, to Save the Children Syria.

Having partaken in charity concerts previously, the Marsh-born artist is hopeful of raising funds through the downloads of his hopeful hit.

“I have always tried to do charity work. Just last month we raised £2,600 for Save the Children through a special gig held here in Huddersfield,” he said.

“With Waaddaa being my first single release, I thought it would be a good opportunity to do something different for charity.

“For just 69p, you can buy the single from iTunes and all of the money will go to charity. It’s as simple as that.”

A late starter on the music scene, Aidan has always had a passion for singing yet only began his professional foray into the industry less than a year ago.

Following the completion of a degree in Architecture at the University of Huddersfield, and a successful property career, he has begun building a reputation locally and is active on all social media.

His videos on YouTube have received thousands of hits whilst he has begun gigging more and more frequently.

“I was so pre-occupied when I was younger with work and caring for my parents that I never really had the drive to pursue music,” he said.

“I would always wake up and go to sleep singing. Everywhere I went, I always had a tune in my head and my friends were always telling me to do something with my voice.

“Now that I am in a position where I can have a go at it, I’ve decided to just go for it. It has been great fun so far and people have been really supportive of my music.”

‘Waaddaa’ is the story of a young man who returns home to find his partner is missing.

The song revisits different parts of their lives until he can discover her whereabouts.

“The ending is quite a twist and I think people will really enjoy it,” he said. “It has been produced by a team here in Huddersfield and we have an official music video alongside it which people will enjoy.

“I’m hoping music fans will get behind it and help raise as much funds as possible for Save the Children Syria.”

He continued: “It has been a real team effort throughout the project and I have more classical hits lined up for the future.”

Aidan M’s ‘Waaddaa’ will be available for download from iTunes by the end of May.

Refusing to throw in the towel