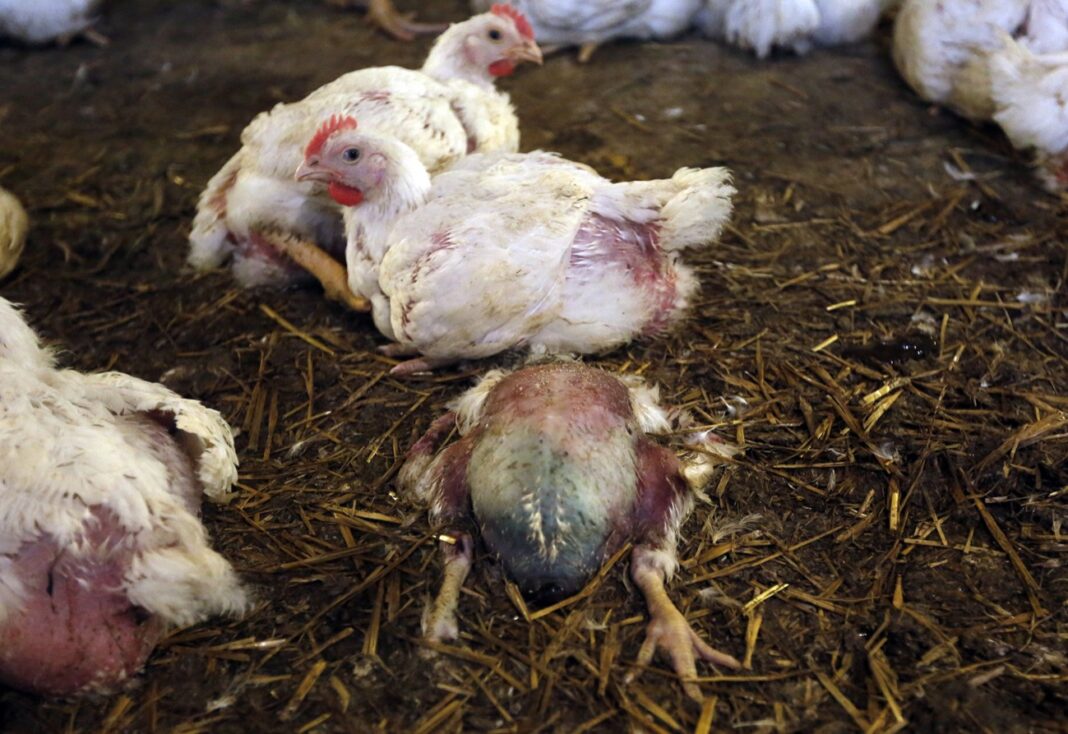 The sheer tonnage of fake halal meat being passed off to unwitting Muslim consumers is at ‘shocking’ levels, sources from deep within the UK halal meat industry say. Fears are figures run as high as 75 per cent of ‘halal-labelled’ chicken not being halal at all.

Reports show that the Muslim community, which makes up 5.1% of the population in the UK, along with the supply to the halal restaurant and takeaway trade, consumes a whopping 46% of all poultry produced.

This means Muslims approximately consume up to eight times more meat and poultry than their non-Muslim counterparts.

Fears about the authenticity of some of the ‘halal’ meat crossing the counter into the hands of trusting Muslim customers in Britain has been a debate for many years, but this year’s coronavirus pandemic lockdown strangled regular across-the-border poultry supply chains.

During the government-imposed lockdown, Muslim butchers who would normally buy from chicken-sellers from Europe were seen in their droves at halal abattoirs all across the UK desperate to get their hands on what they could, proving the point say inside sources, that they’re regularly sourcing poultry from other external non-halal sources.

The majority of the cheap, days-old imported poultry entering the UK is from Europe – particularly Holland, Poland and Spain.

Halal chicken industry bosses say that along with not complying with the Islamic halal slaughter process, much of the chicken being passed off to consumers is not fit for human consumption at all.

But the question is whether the consumers’ relentless demands for cheap chicken is driving the ‘haram’ market, or is it insidious ‘Muslim’ butchers wanting to make larger profits?

One European van driver told Asian Express how he was regularly dropping off the cheap and often not fit for human consumption chicken at sites pre-dominantly across Bradford, Leeds, Manchester, Birmingham and Glasgow.

The ‘haram boys’, as they are commonly referred to by halal bosses, are the rogue butchers who will buy from anyone selling chicken at scandalously low prices, often disregarding were it has come from or if it meets Islamic slaughter requirements or not.

One Yorkshire expert recently stated that some ‘halal’ retailers had told him they would not eat their own stock because they knew it did not meet the halal guidelines.

During the early days of lockdown, the numbers of Muslim butchers at halal certified abattoirs in the UK shot up. Industry insiders say that this indicates how many butchers are sourcing poultry elsewhere, often from dubious sources.

Video footage obtained by Asian Express shows halal wholesale butchers in their company branded vans in mid-night exchanges with HGV drivers from across the border, in locations such as motorway service stations, offloading pallets of cheap, mass gas-killed non-halal chicken in the middle of the night.

One European van driver told Asian Express how he was regularly dropping off the cheap and often not fit for human consumption chicken at sites pre-dominantly across Bradford, Leeds, Manchester, Birmingham and Glasgow.

Laughing, he said all the buyers (mainly Pakistani butchers) are fully aware of it’s source and that ‘this chicken doesn’t comply with halal slaughter at all’.

Criminal gangs trading in ‘unfit for human consumption’ meat make millions of pounds by offloading the chicken to butchers and wholesalers, conning their customers into eating potentially diseased food say sources deep with the halal meat industry. And it’s all coming in from across the European border. The stories have been covered numerous times by media sources over the years.

The illegal trade in poultry deemed unfit to eat is said by industry insiders to be prospering because of increased consumer demand for chicken.

Discarded birds are bought from large chicken slaughter-houses. Once they’ve been cleaned up and had the most noticeable defects removed, they’re repackaged and, in some cases, even marked with fake European health labels.

The batches are then transported via vehicles across the border to meet wholesalers and claim a mark up of around £1,500 per tonne.

It’s claimed that most halal butchers buying this poultry are aware of its history, and that it’s not been halal slaughtered, and also may not be fit for consumption.

After months of investigating and speaking to numerous sources, Asian Express believes it’s only scraped the surface of the true extent of deception in the halal chicken industry.

ISLAM: An argument could be made that eating natural, organic, free-range livestock is just as essential, if not more essential, than simply focusing on the way in which the animal was slaughtered.

Shouldn’t we be searching for the most ethical food, derived from moral sources?

This surely goes beyond slaughtering rituals and extends to concern about the animal’s whole lifespan.

Even if we set aside the animal’s welfare, eating meat that comes from a healthy and well-looked after animal is going to be much healthier for us than an animal that has been raised without any consideration for it’s health.

Islam repeatedly instructs to treat animals with kindness and humanity, if each of us took the little time it took to investigate where our meat is coming from, we would be taking a huge step in the right direction.

Investing time in this will allow us to find sources of meat that are not only wholesome but ethical too. Supporting farmers who spend that extra bit to ensure that their animals are reared naturally will not only be beneficial to our bodies, but will help an industry that is worth our support.

The importance of sourcing ethical, local produce is all the more increased given the reality of the carbon footprints of some of the livestock that is found at our butchers today.

Going beyond food, becoming self-aware individuals who care about something as fundamental as the food that we eat, and so taking responsibility for sourcing out the best that is available to us, is a positive step towards self-empowerment.

“The early days of the Covid-19 outbreak was extremely disconcerting.

“Due to restrictions across Europe our order doubled, and we had ‘rogue butchers’ queuing for chicken. It was complete pandemonium dealing with the panic of the buyers.

“This proves how much chicken we eat locally was coming from outside the UK – mainly gas-killed and machine-killed chicken, more often than not non-halal, and days old, stored in chlorine.

“The scale of the problem is horrifying.”

Medina Poultry Halifax confirms that it uses the Hazard Analysis and Critical Control Points (HACCP) system which is monitored both internally and externally by inspectors each month in conjunction with government monitoring.

“The question that begs to be asked is how can you buy three ‘halal’ chickens for under £10?
“Our entire vetting process, including the slaughter, storage and transportation is rigorous… and yes, costly. So, naturally the price for halal chicken is higher when produced under the correct standards in the UK.

GET IN TOUCH: We welcome you to give us your thoughts on this article, contribute/submit evidence for future inclusion, email us: halaldebate@asianexpress.co.uk

Recognising lost lives: Candlelit vigil for the victims of a terrorist...