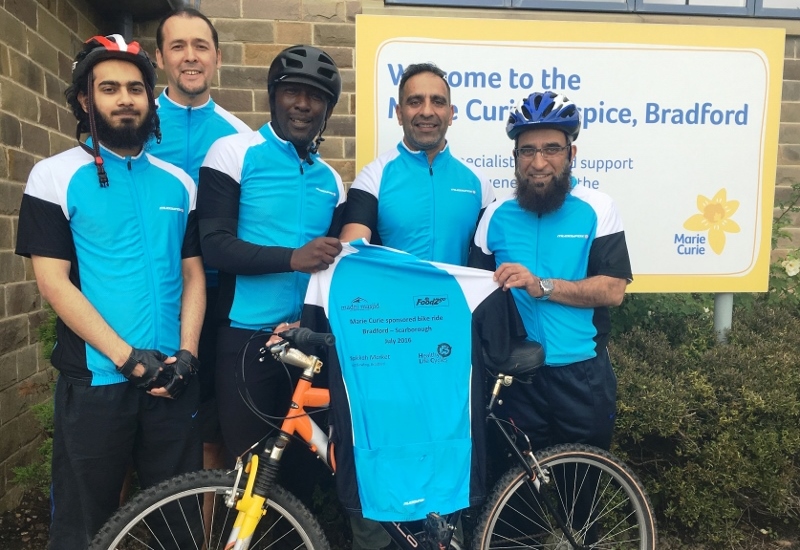 A team of 20 brave cyclists completed a two day sponsored bike ride from Bradford to Scarborough last weekend in an effort to raise funds for the local Marie Curie Hospice.

The event was part of ongoing fundraising efforts being coordinated by the local mosque, Madni Masjid, in West Bowling, who are hoping to raise a phenomenal total of £12,000 in support of the charity.

The mosque is one of the latest organisations to sign up to be part of the charity’s ‘Pay For A Day Appeal’ and are aiming to raise enough to fund two days of the Bradford Hospice running costs.

It costs Marie Curie £5,562 every day to cover the running costs of the Hospice and the support of the community is invaluable in ensuring that the charity is able to continue to provide vital care and support through terminal illness in Bradford.

The two days that Madni Masjid have chosen to dedicate their fundraising efforts to are Eid ul Fitr and Eid ul Adh on the 6th July and 11th September 2016.

Dedicated fundraiser, and one of the cyclists taking part in the challenge, Rifaqat Ali, explains his reasons for helping to arrange the cycle challenge.

He said: “‘Family, friends and members of the community have been cared for at the Marie Curie hospice in Bradford. All were well looked after and nothing was too much for the friendly, supportive and caring staff.

“The hospice provides a fantastic service to the community. Thanks to support from our local mosque, Madni Masjid, and other mosques in Bradford, we are aiming to sponsor the hospice over the two annual Eid days.

He continued: “We had 20 riders that took part from the ages of 20 to myself – who’s 55. They all completed the ride over two days which included 92 miles along country lanes, the Leeds Liverpool canal and the coast.”

It wasn’t all smooth cycling for the group, as a couple of fundraisers suffered bruising after falling from their bikes on the bumpy country trails, but thankfully there were no serious injuries.

Rifaqat added: “A few people in the team hadn’t been on a bicycle for over two years so it was a great achievement for them.”

Liz Howlett, Fundraising Manager in Yorkshire for Marie Curie, said: “A huge thanks to everyone who took part in the cycle ride from Bradford to Scarborough last weekend in support of the fundraising efforts of Madni Masjid and the surrounding community.

“We hear that they all had a fantastic time on a ride that was well organised with a great sense of team spirit as they supported each other to complete the challenge.

“Thank you too to all those involved in the ambitious overall project to raise £12,000 in support of the Hospice as part of our Pay For A Day appeal.”