Prime Minister Narendra Modi of India is on his way back to Mumbai with an estimated £6 billion in bilateral trade offers following his three-day official visit to London.

However, there are questions about whether his talks with British Prime Minister David Cameron will materialise into tangible assets.

Downing Street said that talks focused on further strengthening the security partnership between the UK and India, including the exchange of counter-terrorism best practices and technologies and cyber security expertise.

On counter-terrorism, the prime ministers discussed the importance of tackling the threat from Lashkar-e-Tayyiba and other terrorist groups targeting India. They agreed on the vital need to tackle ISIL, including through countering the narrative that radicalises individuals and leads them to embrace a violent Islamist extremist ideology.

On cyber security, the prime ministers discussed how the UK and India could work together to better protect people and organisations from cyber attacks, with the UK helping to establish a new centre to train the next generation of cyber security professionals and setting up a new Indian cyber crime unit.

The leaders also agreed on the importance of enhancing prospects for Afghanistan’s future stability. They spoke about defence cooperation, welcoming the new UK-India Defence and International Security partnership and agreeing it should signal a step-change in partnering on developing capability, expertise and sharing technology, analysis and information.

However, back in India, sections of the press have raised questions about whether the promises would materialise into tangible trade.

They’ve said that despite three visits by Mr Cameron to India in the past five years, bilateral trade has steadily declined.

In addition, the press said that serious issues which put a considerable strain on the economic relationship remained.

These included problems of easing business regulations for British companies, and relaxing immigration and visa norms for Indian companies, professionals and students.

However, they were happy about the commitment by both sides to fighting terror groups and thought it was significant that Mr Modi raised the issue of UK-resident groups that foment separatism in Jammu and Kashmir and Punjab.

During his visit, Mr Modi received a rock star welcome when he addressed a 50,000-strong crowd of non-resident Indians at Wembley stadium.

He also inaugurated a BR Ambedkar memorial at a building where the father of the Indian constitution stayed in 1921-22 when he studied at the London School of Economics.

It was announced that every year two Dalit students from India would study in any university in London or Europe and they would be allowed to live in that building during their studies.

On his personally-escorted tour of London by the British prime minister. Mr Modi faced protests from activist groups over sexual violence against women in India.

Summing up his first official visit Mr Modi tweeted: “My gratitude to the British people & Govt. Special thanks to PM @David_Cameron for his personal attention to all the aspects of my visit” and “Goodbye UK. This visit was memorable because of the wide range of programmes I attended. The ground covered will transform India-UK ties.” 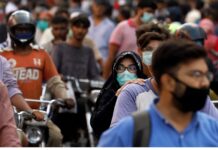