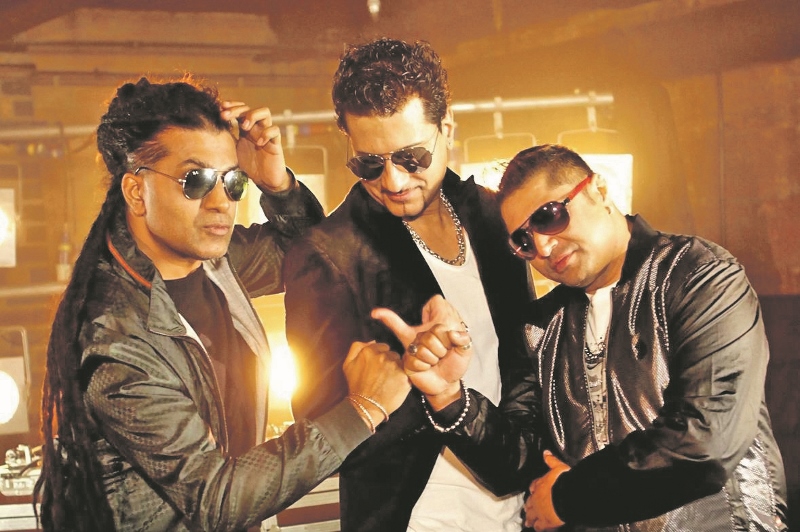 ‘TAB’ is the super-group that the world has been waiting for, combining the three biggest names in the Asian music industry for the past three decades.

Undoubtedly, legends in their own right, TAB brings together the powerful vocals of Taz, the man behind Stereo Nation, the reggae vibes of ‘raggamuffin king’ Apache Indian and the master-mixer Bally Sagoo.
‘Pretty Baby’, the first track to be released by the music icons under their new identity, is a Punjabi dancehall anthem that showcases the talents of the three musical maestros to the max.

With Taz’s Punjabi vibes interspersed with Apache Indian’s signature ragga-stylings and the unmistakable magic touch of producer Bally Sagoo, ‘Pretty Baby’ is guaranteed to set the charts alight.
For decades the three icons of the industry have set their own musical agendas, and always been at the forefront of their respective musical genres. The combination of these three undisputed talents is sure to not only shake up the music scene, but also show that quality collaborations can be genius in their own right.

Taz, Apache and Bally have between them sold millions of albums globally. Taz has been described as the Pioneer of Pop Fusion and the “Prince of Crossover”. He was also the first British Asian to break down the doors of Bollywood as a music director and has enjoyed success in the British Top 40 charts with ‘Laila’ and ‘Don’t Break My Heart’. Having had multi-platinum selling albums including ‘Hit the Deck’, ‘Spirits of Rhythm’, ‘Jambo’, ‘Slave II Fusion’, ‘Oh Laila’, ‘Tazmania’ and ‘Jawani On The Rocks’ to name but a few. His music also featured in the Hollywood movie ‘New York Minute’.

Apache Indian probably best known globally for his mega hit ‘Boom Shak-A-Lak’, also has a huge amount of albums to his name including ‘No Reservations’, ‘Make Way For The Indian’, ‘Wild East’, ‘Karma’, ‘Time for Change’, ‘Sadhu – The Movement’, ‘Home Run’ and more recently ‘It Is What It Is’ amongst others. His music has featured in countless TV commercials and films including ‘Dumb and Dumber’ (both one and two).

Bally Sagoo created waves with his early albums ‘Wham Bam’ 1 and 2 as well as ‘Essential Ragga’, ‘Star Crazy’, ‘Bollywood Flashback’ 1 & 2, ‘Future Shock’ and so many others. He was instrumental in bringing the voice of Ustad Nusrat Fateh Ali Khan to the ears of the British Asian masses and also provided music for a number of films including ‘Bend It Like Beckham’, ‘Mistress of Spices’ and ‘Monsoon Wedding’.

Pretty Baby and TAB is truly a coming together of both talent and creativity and talking about the collaboration, Apache Indian commented: “This has been an amazing and truly exciting new path for all of us.

“The three of us grew up in parallel in the industry, and amazingly never had the opportunity to work together. But the truth is the time and the mojo has to be right – and I think that this is the time for TAB – we’ve taken all of our experiences and put them into a great creative pot to create this fantastic new sound that is fresh, dynamic and well worth the wait.”

Taz added: “I had thought about doing something like this some time ago but getting the three of us together in one place has been really difficult as we are always in different parts of the world. I finally managed it and we just jammed in a studio together and we knew the vibe was right and the rest is history.”

Bally summed it up: “The funny thing was that a lot of people thought Apache and I were enemies and that we hated each other or something.

“That’s so far from the truth. The reality is that we actually never even met till we got into the studio to record as TAB. So this new collaboration will come as a shock to many people.”

The track is supported by a superb video, shot in their home-town of Birmingham and directed by former actor-turned-director Ameet Chana (Eastenders, Bend It Like Beckham).

Sufi music and dance to be celebrated at star-studded festival

Nafees smashes it again with ‘Sazaa’