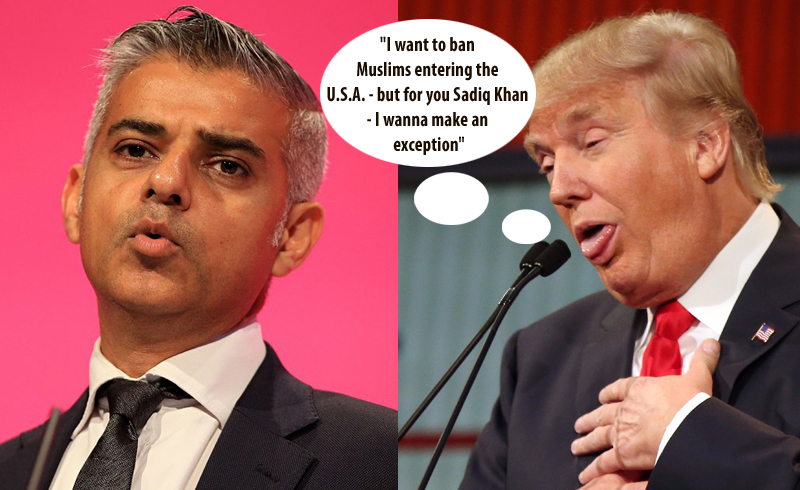 Following billionaire Republican nominee – Donald Trump’s proposed policy to ban all Muslims from travelling to the United States, Sadiq Khan, the new Mayor of London, has publically snubbed the acclaimed businessman’s suggestion that he could be an exception to the rule.

Trump, sparked international condemnation when he proposed a temporary ban on Muslims entering the US following the attacks in Paris last year in which 130 people were killed. He’s since been promoting his hate campaign towards Islam at his public rallies.

He said many Muslims harboured a “hatred” towards America and a ban should be carried out “until our country’s representatives can figure out what is going on.”

David Cameron labelled the idea “stupid” and calls to ban Trump from entering Britain were raised in Parliament after a petition attracted nearly 600,000 signatures.

Now at the suggestion that Khan would be allowed into the US under Trump’s policy, London’s first Muslim Mayor said: “This isn’t just about me. It’s about my friends, my family and everyone who comes from a background similar to mine, anywhere in the world.”

The Mayor of London went on to say that Trump’s “ignorant” view of Islam “could make both (the US and the UK) less safe.”

Mr Khan, the son of Pakistani immigrants, said he wanted to go to the US, but would have to visit the country before January in case Mr Trump won the November election.

But Mr Trump told The New York Times “there will always be exceptions” when he was asked how his controversial proposal would apply to the newly elected Mayor of London.

Trump told the New York Times on Monday 9th May that he was happy to see Khan elected as Mayor of London last week.

Sadiq Khan retorted: “Donald Trump and those around him think that Western liberal values are incompatible with mainstream Islam – London has proved him wrong.

“If Donald Trump becomes the president I’ll be stopped from going there by virtue of my faith, which means I can’t engage with American mayors and swap ideas,” Mr. Khan said.

Mr Khan officially took office on Saturday 7th May following Thursday’s election, which saw him defeat his Conservative rival Zac Goldsmith by 1,310,143 votes to 994,614 – giving him a larger personal mandate than either of his predecessors Boris Johnson and Ken Livingstone.

Mr Khan accused the Conservatives of using tactics “straight out of the Donald Trump playbook” in their campaign against him during the mayoral race, saying: “They used fear and innuendo to try to turn different ethnic and religious groups against each other.”

But senior Conservatives including Chancellor George Osborne and Defence Secretary Michael Fallon have defended the tone of the Tory campaign, saying it was part of the “rough and tumble” of an election.