A woman who taught Bollywood dance to the cast of Hollyoaks and The Real Housewives of Cheshire is to premiere her first children’s theatre show.

Ria Meera Munshi, a 32-year-old dancer, actor, choreographer, model and entrepreneur from Greater Manchester, has now added writing and directing to her CV.

Her first production, called Sue & Sita, launches at Z-arts in Manchester this October before touring venues around Greater Manchester and Yorkshire, including Bradford and Halifax.

The show, which uses puppetry and dance to retell a classical Indian tale, was developed over Zoom during the first lockdown.

It tells the story of a little girl called Sue who goes on a magical journey and discovers she has more in common with the goddess Sita than she could have imagined. Suitable for ages 8+, the production was co-written with award-winning playwright and poet Louise Wallwein.

Ria, who was named young entrepreneur of the year in 2013, said: “Although I have written poetry in the past, this is my first piece of children’s theatre and I am already itching to write my next!

“Sue & Sita was a lockdown project, supported by Arts Council England and Z-arts. Collaborating creatively with Louise certainly helped to preserve my mental health throughout the last 18 months.

“I was fortunate enough to keep busy with online bookings throughout the pandemic, but it doesn’t compare to preparing a piece of work to be delivered face-to-face in front of a live family audience.”

Ria, a Gujarati Hindu, says that the character of Sue is not based on herself, but that the two share a love of dancing and everything colourful. She says that growing up in Greater Manchester has given her a ‘beautiful mix of cultural fusion’.

She said: “Sue & Sita draws on the Hindu tale of Ramayan. This story, as well as Lord Ram, Sita Maa and Hanumanji are all Hindu idols who are close to my heart.

“The intention was to bring Sita into the modern world, creating a strong, independent, warrior goddess who is, in turn, inspirational to the younger generation.”

Ria set up her own creative company, Ri Ri’s Dance Academy, in Tameside in 2011 when she was just 22. The mobile dance and theatre company promotes Indian dancing, culture and heritage and in 2011, broke a Guinness World Record for the most people dancing to a Bollywood song. She is the daughter of Rushi Munshi, who has a background as an assistant director on Bollywood films as well as writing and directing for TV and theatre in Mumbai.

Dates for the tour 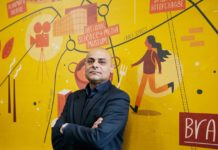 Social enterprise takes the shame out of periods. Period.