“Once, I was still in costume as a holy man and decided to quickly go out and grab a tea. I found myself surrounded by people who wanted religious advice!”

A highways design engineer from Leeds has just landed a role as a befuddled, slaphappy police inspector in a Bollywood film.

Sandeep Choudhary, known as the ‘funnyman’ amongst his friends and family, is often found entertaining them with his rib-tickling storytelling style and crazy funny expressions.

And being a bit of a sensation on TikToK and Instagram seems to have paid off for Sandeep, as he’s just clinched the all-important role of ‘Zalim Singh’ – the bogged down but humorous police inspector in upcoming bollywood flick titled ‘Dhananjay’. Over 1700 people had applied for this role.

“I’ve always loved playing up the funny side of my personality, ever since I was a child – I often found myself in trouble!” admits Sandeep, an engineering graduate from India.

“Now, this opportunity in ‘Dhananjay’ has given me hope to pursue my passion for a career in acting.”

Describing himself as a cheeky, audacious child, Sandeep says as a college student he often found himself in sticky’ situations.

“Once, I was still in costume as a holy man and decided to quickly go out and grab a tea. I found myself surrounded by people who wanted religious advice! It was a really difficult one to get out of!”

Currently in preparation for filming, due to start in the coming weeks, Sandeep has taking advantage of the online workshops provided by the directors which, he says he has found immense useful.

“I practice the dialogues in front of the mirror in preparation for the video samples I need submit to the production company for feedback. So far, it’s all been really great. I’ve learnt a lot and I’m really looking forward to the actual filming.” 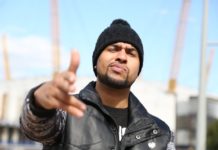 DOABM: YouTube star Humza teams up with the police to prevent young people being drawn into violence

Flood support is ‘not enough’