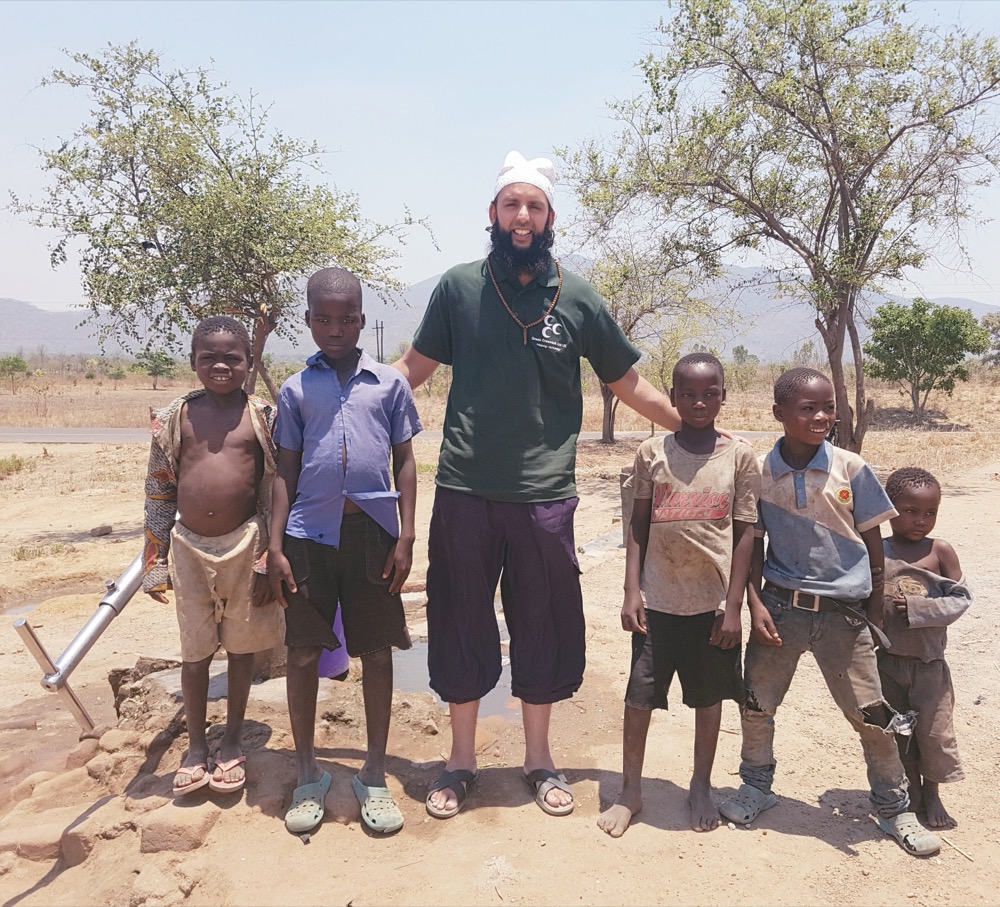 A hero charity worker from Bradford has just marked the milestone achievement of crossing £200,000 in his mammoth fundraising efforts.

Nazim Ali, a school careers advisor who works at three inner-city schools, has devoted time off working voluntarily for several charitable causes. He’s run countless marathons, completed mountain treks, and incredibly even run 10k Races in Ramadan whilst fasting 18-hours during the summer, hence headlined as the ‘Ramadan Runner’ in Asian Express for almost a decade.

Crossing the £200,000 fundraising feat figure for this award-winning Manningham-man has been an awe-inspiring journey, which has taken 13-years to achieve.

His commitment to continuing enhancing inter-faith relations has seen him partake, with equal vigour, numerous mainstream Yorkshire-based charity fundraising activities as well delivering aid to Rohingya Muslims, refugees at the Turkey/Syria border and those in war-torn Mosul in Iraq.

Nazim cogitates helping those in need as his “religious obligation as a devout British Muslim”, irrespective of religious affiliation or ethnicity or at local or international level.

This month Nazim has returned to Bradford after a week-long self-funded humanitarian aid trip to poverty-stricken Malawi.

His decision to deliver aid to southern Africa came after harrowing reports of human suffering following widespread destruction caused by Cyclone Idai in Malawi and neighbouring Mozambique. Malawi ranks as the world’s third poorest country with over 60% of the near 18 million population live under the international poverty line of £1 a day.

Malawi suffers high death rates due to water-borne diseases, HIV/Aids, malnutrition and generally poor health. Furthermore, it is estimated there is just one GP for every 50,000 Malawians.

Nazim was one of a four-strong ‘Team Special Khidma’ (which translates as Servitude in Arabic) who collectively raised a staggering £40,182.33

Along with distributing hundreds of 40kg food parcels to poverty-stricken Malawians many of whom are widows, 1100 pairs of footwear were provided to women and children who often walk barefoot.

Talking about his journey, Nazim says: “After three flights and travelling just over 30-hours we reached Malawi.

“The following morning we were out purchasing the food parcel contents. Per parcel, we packed: 10kg rice, 10kg maize flour, 5kg beans, 5 litres oil, 2kg salt, 5kg sugar, 3kg ground nuts, one traditional cloth for the women and some sanitary products. This parcel will last a family of five for at least one month.”

‘Team Special Khidma’ faced an intense and action-packed aid trip in which they’d only get two or three hours of sleep a night.

“Starting early in the morning, they worked in 30 degrees heat and finished late at night often using the car headlights to finish off what they were doing.”

The crew covered over 1,000 km by driving and visiting remote and rural villages in Malawi.

“We held two children’s parties and provided food to over 500 poor children in total, distributed over 1,500 packets of sweets generously donated by Yorkshire-based businesses distributed.

“In Manguba and Chopialso, we served up over 500 warm meals to the poor and opened three water wells.

“We inspected and repaired many houses badly damaged by Cyclone Idai in March 2019, distributed over 200 poetry books kindly donated by Keighley-based Abu Zahra Foundation and we also distributed money to the poor.

“Hundreds of food bags consisting of food, hygiene packs were donated to the paediatric patients in Balaka District Hospital as well as crates of nappies and baby milk.

“We distributed several hundred chitenjees (traditional clothing for Malawian women), distributed 1,000 bottles of soft drinks and biscuits, distributed 60 live goats to the widows and poor so that they can become more independent.”

“But the work doesn’t stop here. In the coming weeks, hundreds of food parcels will continue to be distributed.”

Amir Khan from Green Crescent Aid UK the organisation with whom Nazim travelled and delivered aid in Malawi comments: “I am grateful to Nazim Ali, Faisal Khan and Adnan Hussain for all of their unstinting dedication and commitment in raising over £40,000 and their tireless efforts in distributing the aid.

“The aid will make a massive and life-changing difference in one of the poorest countries in the world where clean water is a luxury we in the UK take for granted.”

Head volunteer Adnan Hussain says: “This was my first deployment and I thoroughly enjoyed it. I was saddened by the poverty I saw and was overwhelmed by the love and appreciation the team received from the Malawians.”

Volunteer Faisal Khan adds: “We have a lot to be grateful for in the UK such as having footwear and clean water which many Malawians don’t have. The highlight was seeing so many happy faces particularly the children. I am and the team is grateful to all of our donors for all their support.”

Nazim adds: “The Asian Express have kindly featured my community and humanitarian initiatives consistently for over a decade now.

“I recall from 2008 onwards they featured the annual ‘Bringing Communities Together’ football tournament. Ever since, they have provided me with exposure whether that be for my charity runs, providing toys to poorly children at Bradford Royal Infirmary Children’s Wards or my numerous humanitarian aid trips abroad.

“Exposure through the Asian Express newspaper has allowed me to raise thousands of pounds for a plethora of causes as well as inspire others. I’ve received enquiries from Asian Express readers on how they can donate and more importantly how they too can support community and charitable causes in their localities.“

“I am grateful to the Asian Express for their on-going support – it is not often a newspaper provides sustained support to individuals trying to make their humble contribution both at home and abroad.”

Choose from hundreds of career focussed courses at Bradford College