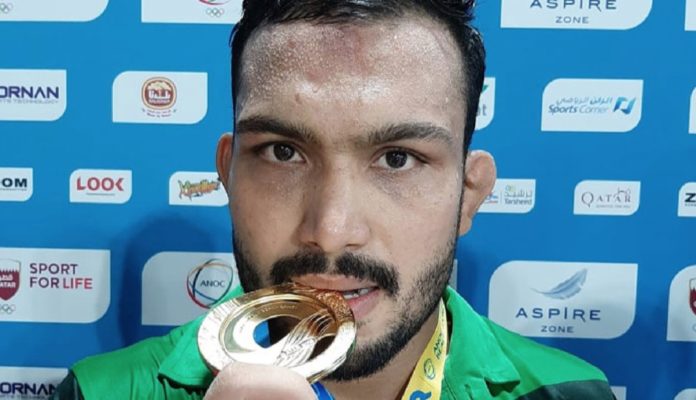 A Pakistani wrestler has added another medal to his cabinet after bagging gold at the World Beach Games in Doha, Qatar.

The 30-year old remained unbeaten in the 90kg weight category throughout the day and truly outclassed all of his opponents.

In the final round, Inam was trailing 0-2 against Georgian Dato Marsagishvili but towards the end of the fight, Inam pulled himself together and gathered five crucial points to register a 5-2 victory instead.

After registering the victory, Inam raised the Pakistani flag and roamed around the arena as he won the gold medal.

Inam beat Spain’s Pedro Jacinto Garcia Perez 3-0 in the semi-final and remained top of the group winning all four of his matches.

Speaking to media after the victory, Inam Butt said: “It was tough group for me, but I had prepared well for the championship.

Inam revealed that in final moment he grabbed his opponent and took him down and brought Pakistan’s flag on top once again.

“It is proud feeling winning the medal, it is only because of your prayers,” Inam said.

“In the final, I was mentally prepared as I had defeated Marsagishvilli in group matches. But, he was very aggressive in the gold medal bout. After he got an initial point, a point was awarded to him that was supposed to be for me, but I didn’t lose hope.

“Even before the World Beach Games, we didn’t get enough training opportunities. I trained for six months and the PSB invited me for camp only three weeks before the event.

The young wrestler added that he wants to dedicate his medal to people of Kashmir who are suffering for last two months.

Talking about this future, the champion wrestler said that he’s set to play in national games and then he will go to Nepal for South Asian Games.

He, however, was disappointed with the government and the Pakistan Sports Board because of cold shoulder treatment towards wrestlers.

“Now I have to play Olympic qualifiers but there’s no ray of hope for me – I don’t have anywhere to go for further training.”

Meanwhile, Arif Hasan, president of Pakistan Olympic Association said: “Inam needs the government’s support for training in Russia and for Olympic qualifiers. Will someone help him or this will be forgotten too.”

UNUSUAL BOND: How a salon boss & a woman with a serious brain condition are changing lives