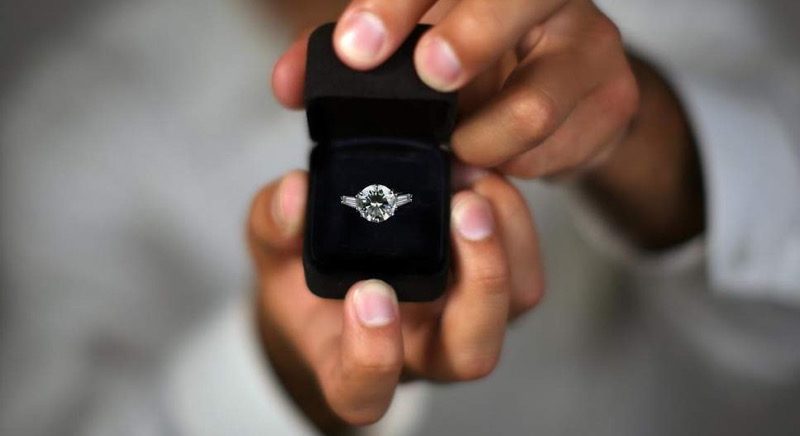 The average woman expects her wedding proposal to be at a landmark in her home city, with a dazzling ring costing £1013, according to new research. And when he does pop the question, Mr. Right should drop down to one knee, in a private setting.

Three quarters of women would like to help pick their own engagement ring, which will be a relief to blokes who aren’t sure of their partners’ tastes.

And over a third of women think their man would make the wrong ring choice if left to his own devices.

The most popular type of ring is a solitaire (round) cut diamond on a white gold band – with just one in twenty opting for an unusual stone like a ruby or emerald.

A happy marriage starts with a happy proposal, and the ring is something that absolutely has to be perfect – whether it’s a flawless stone or a bespoke ring with some personal meaning to the couple.

Interestingly, fewer than one in five women have every detail of their perfect proposal mapped out in their mind – which gives men quite a lot of room for error.

Half of women say they don’t care where their proposal takes place, but men can play it safe by choosing the beach or a famous landmark to get down on one knee.

An unlucky 35 per cent of British women say their partner isn’t romantic, and a quarter say that they’d probably say no if a proposal didn’t meet their expectations.

In fact, almost one in five women have turned down a marriage offer in the past, for a variety of reasons. One said that they didn’t want any man to have any claim on their money or assets. And another said that her would-be fiancé had picked a ring that was so ugly she had to call the romance off.

OPTIMUS LAW: Tis the season to be married

Should I Marry My Cousin?

The Grand Banqueting Suite in Dewsbury is a wedding venue to...

Should I Marry My Cousin?