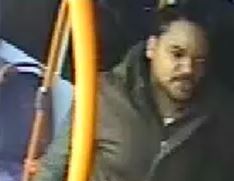 Detectives have released images of a man they would like to speak to in connection with a vicious assault on a bus driver in Croydon.

The incident occurred on Saturday, 16 April 2016 at approximately 01:35hrs on a Route 75 bus whilst it was parked on the bus stand outside Fairfield Halls, Croydon.

The victim, a 53-year-old bus driver, was checking the upper deck of the bus when he heard the bus door open. He went downstairs to the lower deck and was approached by a man who punched and kicked him several times, knocking him to the floor.

The victim sustained a large cut to his forehead as well as substantial bruising. The ambulance service treated the victim for head injuries before taking him to hospital. He has since recovered from his injuries but is still suffering from emotional trauma.

The suspect is described as a light-skinned black man, aged between 25 and 35 years, of large build, approximately 6ft tall, with dark, tied back afro style hair and a beard. He wore a green hooded “Puffa” style coat. The suspect may live in the Croydon area.

The incident is being investigated by detectives from the Met’s Roads and Transport Policing Command.

There have been no arrests.