Nigel Farage is no longer the leader of the UK Independence Party, after Paul Nuttall has been elected.

The 39-year-old Member of the European Parliament, who served as UKIP’s deputy leader for six years, won 62.6 per cent of support among party members.

He has promised to ‘put the great back into Britain’ and has urged the government to ‘give us a real Brexit’.

The Liverpudlian has vowed to replace the Labour party as ‘the patriotic party of the working people’.

Mr Nuttall’s views are known to be divisive. He is notoriously tough on crime, having said he is open to a referendum on the reintroduction of the death penalty for child killers.

He has also called for a referendum on whether abortion should be permitted.

A former university history lecturer, Paul Nuttall won a crushing victory to take over from Nigel Farage – who stood in as interim leader after Ukip came close to implosion in recent months.

In his acceptance speech, Mr Nuttall, said: “The country needs a strong UKIP more than ever before. If UKIP is to be an electoral force, there will be an impetus on Theresa May and her government to give us a real Brexit.”

He added: “I want to replace the Labour Party and make UKIP the patriotic voice of working people.”

Speaking on BBC Two’s Daily Politics, Mr Nuttall said the party would be “speaking the language of ordinary working people… we’re going to move into the areas the Labour Party has neglected.”

He then went on to dismiss Labour leader leader Jeremy Corbyn and John McDonnell and Diane Abbott as part of ‘a North London Islington set’.

He said: “We will be focusing on the issues that really matter to working-class people on doorsteps – immigration, crime, defence, foreign aid, ensuring that British people are put to the top of the queue in the job market.” 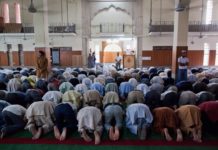 Brexit… not yet. High Court rule on postponement of EU exit

Ukip accused of accepting impermissible donations from the Alliance for Direct...