As the focus of cricket fans turns to the international game during the winter months, business has already begun back at county level with Derbyshire pulling off one of the coups of the season so far.

The signing of South African leg-spinner, Imran Tahir, was announced earlier this month on the club’s official website and signals their first overseas signing for 2017.

The 37-year-old is due to join up with the squad in June 2017, after the ICC Champions Trophy, and will be available in all formats of the game until the end of the season.

Currently ranked as the number one bowler in the world in Twenty20, the signing has been praised by club officials and fans alike.

Chairman, Chris Grant said: “At the end of the season, we committed to investing in top quality players to improve the squad and ensure we could compete more strongly in 2017.

“This signing clearly demonstrates that we are delivering on that commitment and we look forward to welcoming Imran to Derbyshire.”

Tahir has represented South Africa on over 100 occasions, taking 211 wickets with an average of just 26. As a professional, he has taken 1,193 wickets in over 500 games.

Director of Cricket at Derbishre, Kim Barnett said the club were ‘excited’ to have him onboard.

“We are keen to strengthen our squad with experienced match winners who will also help our talented youngsters,” he said.

“With his vast international and domestic experience here in England, Imran fits the bill perfectly.

“He is one of the best leg spinners in the world and we’re very excited to have him on board. Not only will Imran bring an added dimension to our bowling line up, his influence on the team and players, such as Matt Critchley, will be immense.

“Whilst our initial plans are very much focused on next summer, we are both going into this with an open-mind and a view to looking at long term options.”

As well as starring on the international scene, Tahir has tasted County action in the past, turning out for Hampshire, Warwickshire and most recently Nottinghamshire.

Ahead of his move next summer, the talented bowler said: “I love playing cricket in England and I’m looking forward to playing a senior role at Derbyshire.

“I’ve learned a lot over the years and if I can pass my knowledge on to youngsters and help win matches, then it’s a great option for me.” 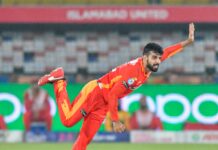 ‘Time to get ahead of the game’

From Bradford to India