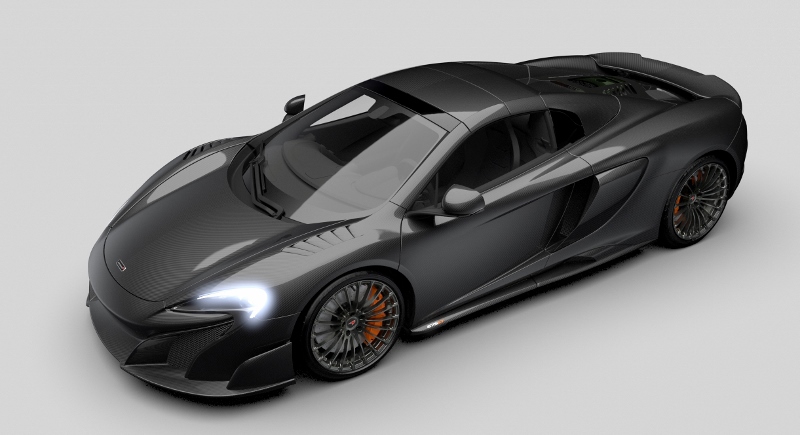 And when you talk about something like a 675LT, P1, or P1 GTR, that impression isn’t far-stretched, but now somehow McLaren have made a limited-edition car based on the incredible 675LT that has 40 per cent more carbon fibre than any other.

Strictly limited to 25 units globally, all of which have already been sold, it’s based on the 675LT Spider and has been produced on “special request” from McLaren customers captivated by the visual carbon fibre bodied McLaren P1.

Now, if you are going to have a shot at making the don of supercars, you’ll need a few key ingredients: one V8 engine that sounds like heaven but produces a demonic 666 horsepower, doors that open up and not out, carbon fibre (buckets load of) and a delirious team of designers who’ve been locked up in a basement and live on energy drinks.

The key here, is to ensure the car remains light-weight and aerodynamically efficient so McLaren Special Ops have applied gloss carbon fibre to the entire body of the car, keeping the entire bodyweight to just 3,016lbs.

As with the 675LT Spider, the front bumper with larger splitter and end plates, front under body, side skirts, side intakes, lower side intakes, rear bodyside lower, rear fenders, rear deck, rear bumper, diffuser and ‘Longtail’ Airbrake are all carbon fibre but with a gloss finish revealing the inherent weave of the material.

Under the gloss carbon fibre skin of the MSO Carbon Series LT sits the heavily-revised 3.8-litre twin turbo V8 powertrain from its Coupé sibling, ensuring performance figures are worthy of the LT badge.

The changes to the powertrain saw more than 50 percent of the components replaced to ensure optimised levels of power, torque and drivability. These include new, more efficient turbos, detail design changes to the cylinder heads and exhaust manifolds, new camshaft and lightweight connecting rods, and a faster-flowing fuel pump and delivery system.

Priced at just over half a million quid, this limited-run model quickly sold out – the lucky owners will get their first deliveries towards the end of the year.
Sigh.