Empowering Communities has begun its latest mission in helping those with nothing to start making something for themselves, as volunteers targeted some of the world’s most isolated communities.

In the beginning of November 2015, Empowering Communities sent a team to the Tharr desert region of Pakistan. Plagued with droughts lasting years at a time, agriculture is pretty much non-existent and even the most basic of human needs – drinking water, is something incredibly scarce in this region.

Where people have to travel for up to three hours to the nearest streams to get water just to drink and survive. Here you’ll see families sending out their young with buckets to make the journey on foot in the scorching heat and with the help of almost no technology at all to fill up what they can carry back to their homes.

Living in mud-huts, barely surviving each day with what little they manage to gather, every morning is another battle of life and death.

When water is so scarce, how can anyone expect these people to look at building a future? When the very concept of survival is seen as such a huge challenge, then things like education and a career are beyond even the wildest of imaginations here.

This is where empowering communities felt that the biggest difference would be made by helping those people. So a team got together and began the arduous journey. Driving 17 hours from Mirpur in Kashmir, equipped with all the tools necessary to begin the important task of providing clean drinking water and make life that little bit easier for the people of Tharr.

Along the way, things like shops and service stations became increasingly rare until the final few hours were nothing more than a drive through barren wasteland. Several hours and hundreds of miles later, a small village was spotted. The stories, as heartbreaking as they were, weren’t anything that Empowering Communities were not prepared for. So the task began.

For two days, living out of tents, working day and night to find the most convenient points for wells and hand pumps, the team worked tirelessly to initiate the first supply of regular and clean drinking water to the people of Tharr. Braving the freezing temperatures at night and the blazing sun during the day, the task ended 40 hours later with 16 pumps fitted to provide water for 50 houses of the village.

One local man from the area, named Mohammed Maqsood, said: “I have grown old, years have gone by and the world has forgotten us, we’ve also forgotten the world.

“We think of nothing more than just getting through each day trying to survive. This drought has taken most of my family.

“My brothers and sisters have one by one fallen victim to it and all I can do is pray. Today my prayers have been answered and God has heard me.

“I’m so thankful for his help. He has sent angels to finally end this daily torture.”

With each well and hand pump donated by generous people of all ages from all backgrounds in the UK, it is a small price to pay for the task of having saved so many lives in the future.

Many others like Maqsood will now no longer be terrified for the lives of their children and their very existence whenever warmer weather does come.

You too can be a part of this amazing drive. Your donations are needed more than ever to achieve this. Water pumps and wells will be funded by Empowering Communities through your donations and you can help today by either volunteering or making a donation.

You can call the office on 01274 502750 or email info@empoweringcommunities.org to offer your help or setup a direct debit today.

Alternatively, you can text EMPOWER to 70660 from your phone and give £3 today towards Empowering Communities. 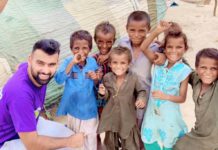 4.1 million hours of work put in by volunteers

Local Muslims dig out wellies and spades to help in relief...