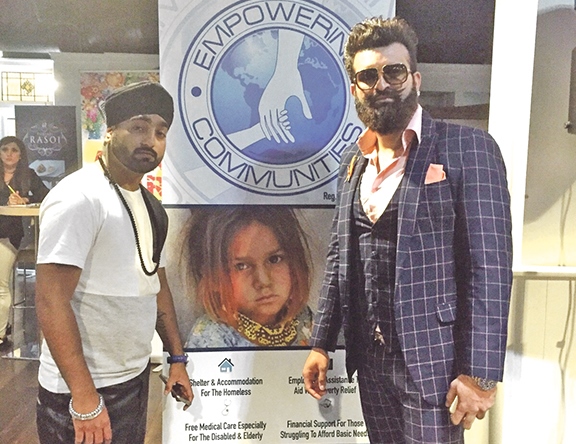 Empowering Communities has had an incredible year. Working around the clock to make a difference, tackle poverty and rebuild lives one step at a time, they’ve caught the eye of some of the biggest names in entertainment today and begun to really make strides in their aim of facilitating people to build a healthier tomorrow.

Helping children, mostly orphans, to gain freedom from slave labour so they can attend school and gain an education as a right rather than privilege, is one of the organisation’s top priorities.

Empowering Communities have also been providing housing, jobs, medical aid and carers respectively for as many people as possible.

From infants to the elderly, the jobless to the disabled, helping with either cancer treatment or a child’s education, the charity are undoubtedly making inroads like never before, tackling and ultimately defeating the nemesis of poverty, one small community after another.

With the amazing success they’ve had in their first project in Pakistan, Empowering Communities caught the attention of Bhangra legends, RDB, Punjabi megastar, Navraj Hans – son of the iconic and incomparable Hans Raj Hans, and having now been selected as the charity of the year by Brit Asia, it seems like good news does indeed travel fast.

Hot off the Brit Asia World Music Awards 2015, we had a chance to catch up with the superstar ambassadors of Empowering Communities and find out a little bit more about the ever-growing support and everlasting impact of this incredible organisation.

N.S Chauhan, famous for his vocal artistry behind the microphone, is the representative in India for Empowering Communities and he took a moment to share his insight.

“I would drive past the Empowering Communities office almost every day as it is close to our recording studios until one day I decided to pop in and see what this place was and what these guys were doing,” he said.

“When I saw for myself, the pictures and videos of all the brilliant work they’ve done so far in Pakistan and then hearing that they wanted to work in as many countries as possible, I felt obliged to help.

“I ended up leaving for some shows I had in India and Pakistan and when in Pakistan I saw with my own eyes how huge their impact is.

“Empowering Communities are not just about feeding people two to three meals a day or giving somebody a blanket, they are turning people’s lives around and it was such a fantastic effort, any doubt I had was gone.

“I showed my good friend, Navraj, and asked if he would like to get involved. He had been looking to lend his support and star-power to a charity for some time but when I told him about the guys at Empowering Communities he was moved by their work so much, he made a pledge to not only represent them in India and help raise awareness, but also to lay the foundations of the first shelter project in India with his own hands.

“Navraj is now personally raising funds and supporting the new project in Jalandhar, India and has vowed to help continue the remarkable difference that Empowering Communities makes wherever they go and spread their message as far as he can.”

Empowering Communities has certainly been making great progress in their mission and you can help today by either volunteering or making a donation.

Simply pick up the phone and call the office on 01274 502750, or email info@empoweringcommunities.org to offer your help or setup a direct debit. Alternatively, text EMPOWER to 70660 from your phone and give £3 today towards Empowering Communities.