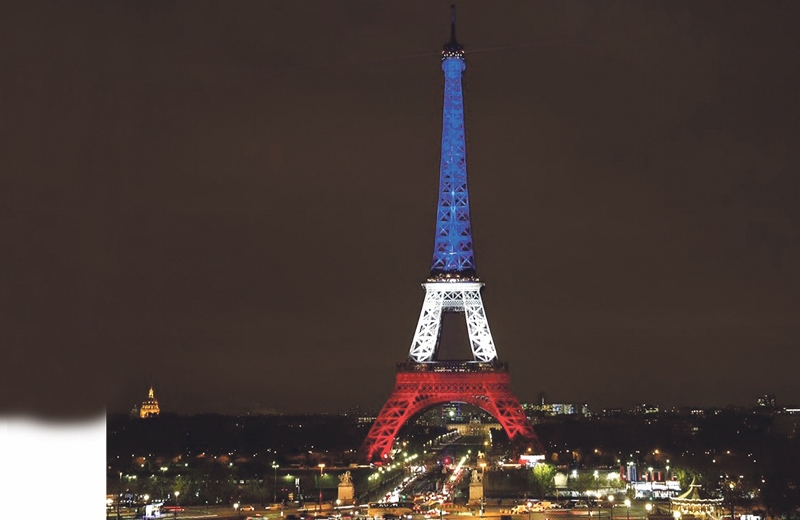 As tributes continue to pour in for the 129 victims of the shocking Paris shootings last week, French President, Francois Hollande, has vowed to ‘destroy’ the Islamic State.

Seven co-ordinated terror attacks were carried out by militants in the French capital on Friday 13th November, in what is the deadliest extremist attack in Europe since the Madrid train bombings in 2004.

The group known as Islamic State have claimed responsibility for the attacks with French military since responding with two waves of air strikes against the group in Syria.

The first attacks occurred almost simultaneously just after 9.20am local time, with two explosions carried out near to the Stade de France stadium as the national football team faced off against Germany.

Attackers then opened fire later in the evening at the Petit Cambodge Cambodian restaurant and Le Carillon bar, at the Right Bank area of the city killing at least 15 people.

Targeted attacks were then carried out at a further two restaurant establishments before gunmen turned their attention to the Bataclan concert venue, where the deadliest shootings were seen.

A full house of 1,500 people had gathered at the venue to see US rock group, Eagles of Death Metal, when black-clad gunmen, wielding AK-47s entered the venue and meticulously began shooting.

Two militants blew themselves up with explosive belts they were wearing before anti-terror police were finally able to end the siege at around 12.30am. 89 people lost their lives whilst many more were seriously injured.

Hollande told Parliament this week that he wanted to see a ‘global coalition’ to rid the world of Islamic State during a rare joint session convened at the Palace of Versailles.

“Friday’s acts of war were decided and planned in Syria,” Hollande said. “They were organised in Belgium and perpetrated on our soil with French complicity with one specific goal: to sow fear and to divide us.

“Syria has become the biggest factory of terrorism the world has ever known and the international community is still too divided and too incoherent.”

As he spoke, thousands gathered at the Eiffel Tower which, like many world attractions, had been lit up in the French colours in support of the victims of the attacks.

Meanwhile, security officials continue to carry out an international manhunt for Abdelhamid Abaaoud, who has been cited by French security as the chief architect of the attacks.

Abaaoud,27, a Belgian of Moroccan origin, first came to the attention of officials last year after boasting in an IS propaganda video about his pride in piling the dead bodies of ‘enemies’ into a trailer.

Over 168 searches have been conducted in France since Sunday night, with 127 arrests and 31 weapons seized.

“The events in Paris are the worst act of violence in France since the Second World War. The worst terrorist attack in Europe for a decade. A horrifying and sickening attack.

“Our hearts go out to the French people, and to all those who lost loved ones.

“Today the British and French people stand together, as we have so often before in our history when confronted by evil. Shocked, but resolute. In sorrow, but unbowed.

“My message to the French people is simple: Nous sommes solidaires avec vous. Nous sommes tous ensemble. We stand with you. United.

“While the full picture of what happened is still emerging, we know that there were multiple terror incidents across Paris and over 120 people are feared dead with many more injured.

“We must be prepared for a number of British casualties, and we are doing all we can to help those caught up in the attack.

“These were innocent victims enjoying a Friday night out with friends and family, no doubt at the end of a hard week. They were not seeking to harm anyone. They were simply going about their way of life – our way of life.

“And they were killed and injured by brutal, callous murderers who want to destroy everything our two countries stand for. Peace. Tolerance. Liberty.”

“Let us make it clear that the attackers are not Muslim, they are distorting the principles of Islam to justify the killing of civilians. Muslims are not to blame for the crimes of  ISIS in Paris or elsewhere in the World.

“The so called Islamic State has killed over half a million Muslims in the past two years. Muslims surely despise ISIS, but unfortunately we Muslims are still propagated to be affiliated with them.

“ISIS do not represent the views of Muslims. It is important that Muslims unite to do all they can to help destroy the filthy dogs of ISIS.

“If the whole Muslim world condemns the atrocities it is not enough. We need to start eradicating them and their ideology.

“They are trying to hijack our peaceful religion and make halal what Allah made haram. A terrorist cannot be a Muslim and a Muslim can never be a terrorist.”