A Leeds man who lost his wife within four-months from point of being diagnosed with an aggressive brain tumour, is determined to help find better treatments and cure for this terribly destructive and fatal cancer.

Gibran and Asiya were living happily together, working from home during the pandemic and planning their future.

They’d only been married for over a year, so as young couples do – were looking forward to things like buying their first home, starting a family and creating a bucket list of places they wanted to eventually travel to.

Just before Christmas 2020, Asiya noticed that the left side of her body wasn’t functioning as well as normal and felt weak.

Doctors told her that she had a trapped nerve in her back, which was causing the left sided weakness, and that it would go with time.

During this time Asiya had private chiropractor appointments to see whether they would help recovery. However, following numerous appointments it did not improve, and the movement on her left side deteriorated to the point that she could not move her limbs and extremities.

In January 2021 Asiya then went back to a different doctor who said that her symptoms did not appear related to a trapped nerve at all, and arranged for her to be referred to the Neurogly Team at Leeds General Infirmary who suspected a possible brain swelling.

Asiya was diagnosed with an incurable brain tumour known as a Glioblastoma Multiforme or GBM. She was also five to six weeks pregnant.

“In the first few days of my wife’s stay at hospital we found out that my wife was around six-weeks pregnant with our first child, which we were extremely excited about,” says Gibran.

“When the neuroglist discussed the results of the MRI scan and told her that she had a brain tumour, our lives were turned completely upside down – it was like the start to a never ending nightmare.

“Prior to my wife’s diagnosis, neither of us had any knowledge of brain tumours, apart from simply knowing that they existed and were considered rare.

“Although we were reassured at this point that due to my wife being young, and them not knowing the grade of the tumour yet, that the outcome may be better than what we’ve read on the internet. We were also told that each case was different.”

However, neurosurgeons told the couple that Asiya’s tumour appeared unusual as it was ‘scattered’, and that it was inoperable due to it’s location being deep inside the right temporal lobe.

“My wife was given a couple of options, to take high-strength corticosteroids for two weeks to see whether it reduced the size of the concerned area and brought back her movement on the left side.

“The other option was to have a biopsy which would involve drilling through the skull to obtain a piece of the tumour for analysis. The risks about this procedure was that if the drill/needle hit one of the key areas of the brain, it could cause loss of sight, speech, hearing etc or even trigger a stroke.”

The couple chose the high strength drugs option, and Asiya was released from hospital and returned home with her bag of prescription drugs, a wheel chair and a walking stick. Gibran became her full time carer while she was home due to her loss of movement.

With no improvement to Asiya’s movement, she was called into hospital for further investigations.

A biopsy was performed, and Asiya was diagnosed with Grade 4 Glioblastoma Multiforme. It was not curable. She was also given the news of her shocking life expectancy – six-months without treatment, and two-years with.

Treatment consisted of intensive chemotherapy and radiotherapy which both can cause issues/birth defects to a baby, so the couple had to make a decisions whether to continue with the pregnancy or not.

“We were truly devastated and heart-broken,” Gibran says.

“We had to make a decision on our baby, as treatment would differ depending on whether we continued with the pregnancy or terminated.

“Optimal treatment could only be provided if my wife was to terminate the pregnancy.
“From the beginning I always knew that I wanted my wife to have optimal treatment although this was a very difficult decision.

“However this decision was understandably even more difficult for my wife being the mother carrying our baby inside her, and her genuinely kind, caring and selfless nature. I reassured my wife that I would support and respect any decision that she made.

“We explored all possible avenues by speaking to specialists, like the Obstetrician, regarding the risks of the treatment to the baby, possibility of freezing her eggs and so much more.

“After a week or so Asiya said to me that she’s made a decision and wanted to continue with the pregnancy.

“She could not bear to think of losing the baby and said she had strong faith in God, she felt that this was part of God’s test for us.”

“At our next meeting with the neuro-oncologist and consultants we informed them of our decision, which they fully supported,” Gibran tells.

“The treatment would consist of radiotherapy only as chemotherapy posed too many risks to the baby. However chemotherapy would be given if needed, after the baby was delivered.

“Radiotherapy still came with risks too, however it was our only hope to manage the tumour.

“We attended a number of hospital appointments for MRI scans to assist with the planning and for specialist equipment to be made.

“In addition, a custom shield was designed and constructed by the hospitals engineering team to cover Asiya’s abdominal area in order to protect the baby from the radio waves, which would be bouncing around the treatment room.

“Once planning was complete, we were given a start date of Wednesday 21st April 2021 for the six-week course of radiotherapy.”

But the night before treatment began, Asiya began to experience excruciating headaches. Rushed to A&E she was given many different pain relief medications.

“A CT scan was carried out to try and determine the cause of the pain,” says Gibran.
“We stayed in A&E that night and while Asiya slept through due the effects of the morphine, I sat watching over her crying and praying to God for the pain to go away. It broke my heart to see her like that.”

But the CT scan results were devastating – a large area of swelling around the tumour which was causing pressure on the skull and subsequently resulting in the excruciating headaches.

Given Asiya’s condition they had to put a hold on the planned treatment. The oncologist told the couple that Asiya’s life expectancy now was only a few weeks.

Nothing would ever stop us from giving up

“After we both broke down in tears and comforted each other, we still had hope.

“Anyone who knew Asiya will know how incredibly tenacious and positive she was, and Asiya was still determined to fight this,” says Gibran.

“Nothing would ever stop her, or us, from giving up. We still had hope that she would be the less than five percent of people who live beyond the statistical prognosis period.”

Over the next couple of days Asiya was showing improvement to the point that the neuro-oncologist agreed that she was fit enough for her first radiotherapy session.

On Friday afternoon she had her first radiotherapy session, which she handled with such grace and courage even though she felt extremely anxious about it.

However, following a traumatic evening on Saturday when the excruciating headaches presented themselves again, Asiya passed away in her sleep during the early hours of Sunday 25th April 2021 while Gibran lay next to her in another hospital bed.

Click here to make a donation on Gibran’s fundraising page

“Sharing our battle with Glioblastoma Multiforme (GBM) has been extremely difficult and has taken me a very long time due to the emotions and memories it brings back with such vividness.

But my hope and intention is to illustrate that unfortunately this can happen to anyone, how unpredictable, unforgiving and uncontrollable brain tumours can be, and inspire you to support ways to help find better treatments and ultimately a cure for this terribly destructive and fatal cancer.

All donations made on my Just Giving page ‘Asiya’s Eternal Charity’ will go directly to Yorkshire Brain Tumour Charity to fund much-needed research and support others who have been affected by brain tumours.

I have chosen Yorkshire Brain Tumour Charity as they have been an incredible support for me and charity close to Asiya’s heart. In addition, the neurosurgeon who carried out Asiya’s biopsy works with them when it come’s to research so there’s a real personal connection.

Asiya may not be with us in this world anymore however her memory, greatness and love will always live on in the hearts of those who knew and loved her.

Not a single second of the day goes by when I’m not thinking of her I will do everything I can to try and help find a
cure for this sooner rather than later so that others don’t have to suffer like we did, I know that is exactly what you would’ve done.

I promised Asiya that I would carry on, and although most of the time it feels impossible, I will not break that promise.” Gibran Pervez 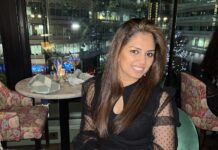