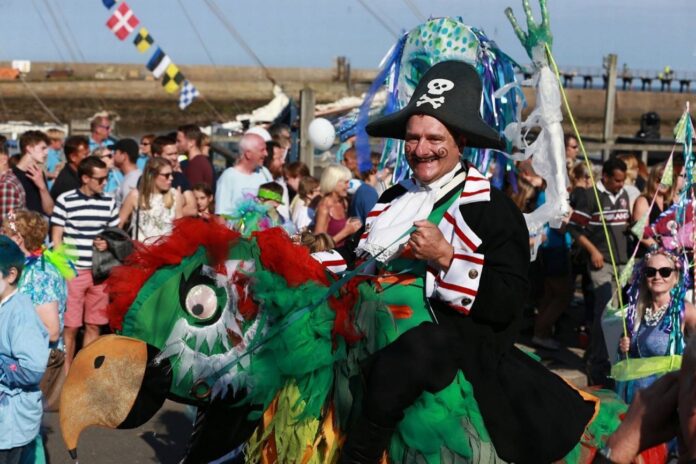 Free family fun is set to sweep through Bradford this August with live theatre, craft sessions, storytelling and music taking over the city’s outdoor parks as part of Literature Unlocked, hosted by Bradford Literature Festival.

The four family fun days, which usually run in City Park but will this year happen across the Bradford district, take place each weekend from 15th August – 4th September. The events are held in partnership with Bradford Council’s Summer Unlocked programme.

Award winning Leeds theatre company Wrongsemble will bring their magical musical pop-up adventure ‘The Magician’s Monster’ to Bradford’s Bowling Park and Peel Park, featuring all the fun and magic of the circus.

They will also bring a modern twist to family favourite Peter Pan in ‘Peter Pan Flies Again’ – think circus ruffs combined with Doc Martens – which will be heading to Lister Park and Keighley Victoria Park. Both productions feature well-known songs to sing along to and will last 25 – 35 minutes, followed by a 15-minute interactive workshop on stage with the cast.

Alongside the fun from Wrongsemble, there will be dance and music performances from local community groups, workshops for kids to get stuck into including dance and circus skills and craft sessions with internationally exhibiting artist Morwenna Catt. There will also be plenty of fun for very little ones, including early years workshops and storytellers. There will be plenty of food stalls to grab a bite to eat and also a funfair for all ages to enjoy.

Hosted by Bradford Literature Festival and made possible thanks to public funding from the National Lottery through Arts Council England, the events have also been supported by Pears Foundation, an independent, British family foundation, rooted in Jewish values which promotes the understanding of key issues through research and education programmes.

Syima Aslam, director of Bradford Literature Festival comments: “On the back of another successful literature festival, we’re so excited to bring some family fun to Bradford’s beautiful parks and outdoor spaces.

“Literature Unlocked isn’t just for bookworms, there is something for everyone to delve into and enjoy. At a time when it’s been so difficult for people to come together, we’re looking forward to bringing communities together in a safe environment to once again enjoy the vibrancy of live events.”

Dates for your diary

Britain First activists: “Your message of hate is not welcome in...