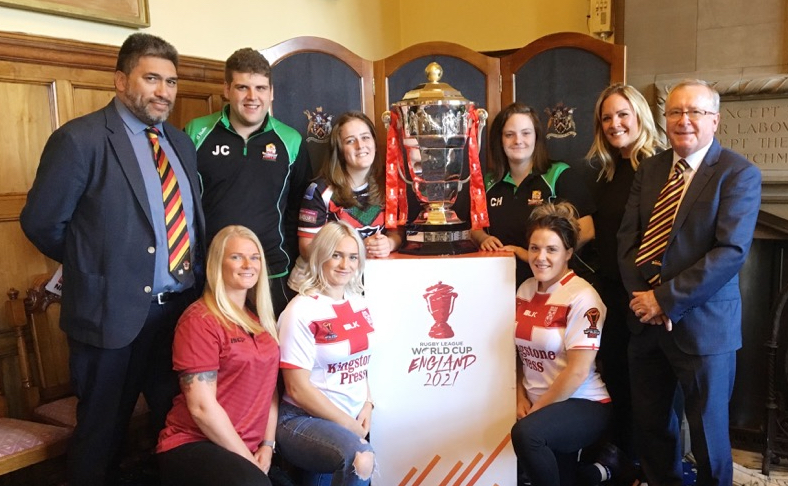 In partnership with Bradford Bulls RLFC and Keighley Cougars RLFC, Bradford Council has submitted its bid to be part of the Rugby League World Cup in 2021.

To celebrate submission of the bid to host the women’s element of the tournament, the bidding team, members of Bradford Bulls Women’s Team and representatives of the Council got together to see the Rugby League World Cup trophy, when it was the centre piece to a special exhibition of current and retired Rugby League silverware, at Bradford City Hall on Saturday 11 August.

Base camps for the international teams could include the Cedar Court Hotel on Rooley Lane, The Bradford Hotel and the Midland Hotel in the city centre and Hollins Hall Marriott Hotel in Baildon.

Bradford has a long history and heritage of Rugby League, from Odsal stadium hosting the match with the largest attendance on record, to the Keighley Cougars being the venue for the first televised international game.

The women’s game in Bradford is also strong with the Bulls Women’s team the current Super League and Challenge Cup winners, as well as 10 players from the team also selected for and played in the England side which made it to the semi-finals of the 2017 Rugby League World Cup.

Councillor Sarah Ferriby, Bradford Council’s Executive Member for Healthy People and Places, said: “Our district is no stranger to hosting major international sporting events, with Ilkley’s Cow and Calf Rocks a stage finish location for both the women’s and men’s Tour de Yorkshire this year.

“Having the women’s element of the Rugby League World Cup in 2021 would be great for Bradford. This tournament really does bring people together from different cultures across the world and being a host would bring great benefits to the district as well as provide an excellent opportunity to showcase the district on the world stage.

“Working with our partners the Bradford Bulls and the Keighley Cougars who both have strong women’s teams the aim, as well as giving a warm welcome for these top class athletes and their fans, is to provide a sustainable legacy, especially for girls and women competing in the game across the district.”

Ken Jones, Strategic and Commercial Consultant at Bradford Bulls, said: “If our bid is successful our focus will be on engaging local schools and community groups to encourage both boys and girls to take part in rugby league events, and we also want to get into the South Asian community, where we feel that there is untapped talent.

“  The tournament will be hosted between October and November 2021. It will feature 16 nations in the men’s format and eight in both the women’s and wheelchair formats. The bid team of Phil Barker and Andy Ross from Bradford Council, Jones and Russ McFarlane from Bradford Bulls and Neil Cullen from Keighley Cougars expect to hear within a month to six weeks if their World Cup bid has been successful.

NHS recognises the work of dedicated hospital Imam with a special...

Ramadan run for refugees: Biggest challenge yet for charity stalwart