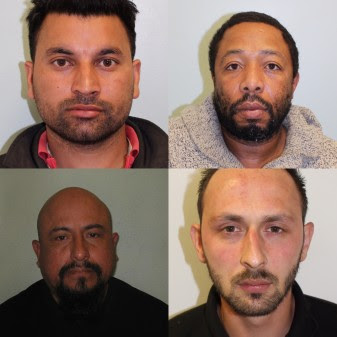 The Met’s Roads and Transport Policing Command has released images of four men wanted in connection with separate sexual offences on the bus network.

[A] Manohar Singh, 28, [12.08.1988] of no fixed address but known to frequent the boroughs of Hillingdon and Ealing, was arrested on 9 June 2016 at a bus stop in Hillingdon for sexually assaulting a teenage girl on a route 207 bus in Hayes, Hillingdon, on 5 November 2015. He was charged with sexually touching a female and bailed to Ealing Magistrates’ Court on 8 July 2016 but failed to appear.

[B] Fabian Downie, 46, [27.07.1970] is of no fixed address but is known to travel on buses all over London and has previously been seen at White City bus station and New Cross bus station. He was charged on 9 January with sexually touching a female on a route 36 bus to Victoria on 12 November 2016. He was bailed to Westminster Magistrates’ Court on 31 January but failed to appear. Downie is also wanted on a recall to prison for breaching probation and release conditions.

[C] Wilson Figueroa, 50, [10.09.1966] of no fixed address but known to frequent Greenwich, Southwark and central London, was arrested on 29 October 2015 in Fennel Street, Greenwich for sexually assaulting a teenage girl on a route 53 bus in Woolwich on 1 September 2015. He was charged with sexually touching a female and was bailed to Bexley Magistrates’ Court on 1 December 2015 but failed to appear.

[D] Salih Simer Akin, 31, [10/08/1985] of Church Street, Enfield was arrested on 5 October 2016 for sexually assaulting a 12-year-old girl on a route W8 bus in Church Street, Enfield. He was charged with sexually touching a child under 13. He was bailed to Wood Green Crown Court on 6 March, but he failed to appear. He was found guilty in his absence.