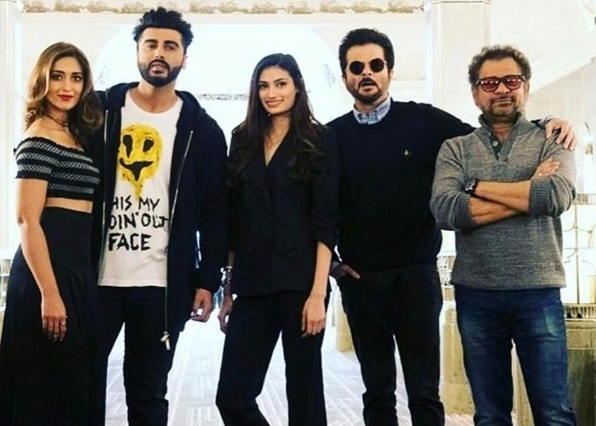 Saturday 11th March 2017, London, UK – Sony Pictures Networks Productions, a division of Sony Pictures Networks India Pvt. Ltd (SPN), have started shooting for their upcoming Bollywood film, Mubarakan, in London. The cast includes Anil Kapoor, Arjun Kapoor, Ileana D’Cruz and Athiya Shetty and they will be shooting in and around the England for around 50 days. As an exclusive first, the cast and director met with media at a fun-filled interaction on location amid the grandiose of Sheraton Park Lane, Mayfair.

At the Press Conference hosted by British Asian actor, Ameet Chana, the cast and director, shared their experiences of their ongoing shoot in London as part of a star-studded and fun-loving ensemble.

Director, Anees Bazmee, explained how he always comes back to writing comedy, because it is the hardest thing to get right. He added that he always takes his writing seriously and never laughs at his own jokes during the writing process.

Speaking about working alongside a supporting cast of local talent in the film, actress Athiya Shetty said, “Working with English people is not that different from working with people in Bombay, but everyone has something different to offer,” adding that it is “happy families” on set.

When asked about filming at Europe’s largest Sikh temple, actress Ileana D’Cruz said she was impressed by the sheer scale of Gravesend Gurdwara, saying that “Even the drive there is lovely!”

When asked about the theme of the film, actor Arjun Kapoor expressed that “This scenario could happen to any British Asian family” and elaborated on the universal theme of “younger generations respecting older generations” and “family values counting for a lot, in things like marriage.” He added that the British Asian talent involved in the film should garner “an honest connection from the audience.”

When asked about the strong synergy between UK and the Hindi film industry, actor Anil Kapoor spoke about the “Long history between Great Britain and India,” adding that both nations are “trying to understand each other more.” He explained that Mubarakan is a “story about British Asians,” but he hopes that “everyone will be able to enjoy it.” Mr. Kapoor conveyed that he has “been very lucky in the choice of scripts” he has been offered throughout his career and that he loves working with the “very real, very situational scripts” offered by Anees Bazmee.

When asked about the choice between commercial movies and movies with a strong message, Arjun Kapoor said that this film “is not branded with one issue, but as you leave the movie there is a thought planted in your head,” adding that it is important for films to “present [issues] in a way that is not heavy on you.” He added, “There is a message in there for those who want to take one away.”

The film which is a family comedy, will be directed by none other than ace director Anees Bazmee. Anees’s last film Welcome Back was a major hit and also starred Anil Kapoor. Prior to that, Anees had directed the Salman Khan blockbuster Ready. With Mubarakan this ‘Triple A’ Jodi of Anees, Anil and Arjun is all set to have the audiences entertained with comedy that will have them rolling in laughter. Anees will make sure that the ‘chacha-bhatija jodi’ replicate the same camaraderie that they share in real life on screen too.

Mubarakan is a laugh riot with lot of confusion, laughter, love, egos and emotions.

Mubarakan is produced by Sony Pictures Networks Productions and Ashwin Varde & Murad Khetani’s Cine1 Studios and is slated for a worldwide release on 28th July 2017 release.