Kipling’s is an award-winning restaurant that’s been based in Sowerby Bridge for six years.

The Kipling’s brand was created 22 years ago upon the opening of their first restaurant Greengates, Bradford.

The team have a passion for authentic Indian and Pakistani cuisine and a desire to present it combined with Western influences.

The name was inspired by poet and writer, Rudyard Kipling, author of ‘The Jungle Book’, who lived in India.

Kipling’s is not your typical ‘curry house’, as the flavours and spices are truly authentic to India and Pakistan.

Rafiq, the owner, said: “We won the ‘Outstanding Restaurant of the Year’ at the English Curry Awards last month, which is great as we’re only a small 50-seater restaurant and we were up against some big names.

“Our chefs and kitchen staff work tirelessly and always put 100 per cent effort into creating superb dishes, which of course helped us win the award.”

Kipling’s has also been part of the winning team for Bradford’s Curry Capital of Britain and partnered up with Bradford College to create a record breaking 114kg Samosa which made it into the Guinness World Records book.

“The emphasis here is a one-to-one link with our customers and regulars,” Rafiq said.

“Coming back to our award, the title is given to outstanding restaurants. The judges were looking for something different and I’m glad we delivered.

“Throughout the year, we have helped various local charities. We made a major donation to Overgate Hospice, which cares for adults with life-limiting illnesses.

“We also volunteered at their garden party, and were the first ever caterers from outside their staff who were allowed to go on their site.”

Kipling’s have also supported local schools throughout the year, too.

“That’s a massive thing for us. We’ve approached schools in the area to ask them and have opened the doors to our kitchens for the day, so students can find out about Indian and Pakistani food.

“The kids received a full dining experience with us. On top of that, there’s a special needs high school in Halifax called Ravenscliffe, where kids from different ages – from 12 to 17 years old – can cook in our kitchen at lunchtime.”

Rafiq believes being a good restaurateur is more than just ‘putting a plate on the table’. His aim is for his eatery to become a major part of the community.

He adds: “Our success is ultimately down to how we gel our community amongst our business.” 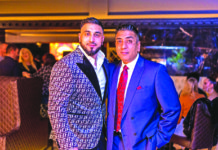