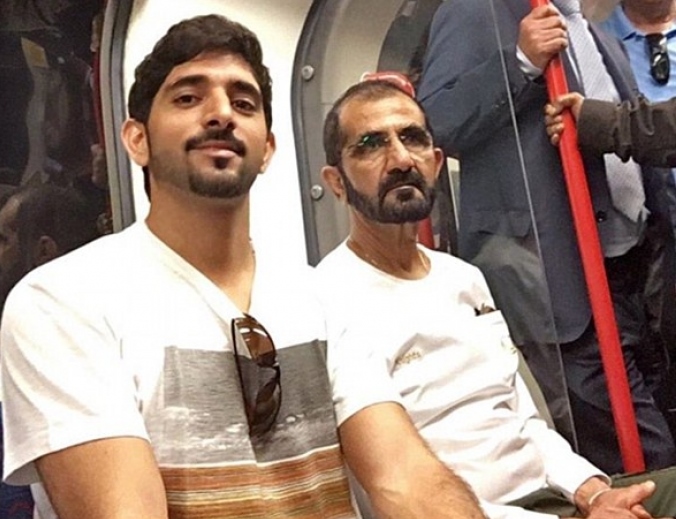 Billionaire Royals catch the train in the capital

At a glance, the picture above seems to be an average ‘tube selfie’ with a passenger documenting his journey on London’s world famous underground.

Look closer and the eagle eyed amongst us will realise that these two men are not the ordinary train travellers at all – but are in fact some of the richest men in the world.

The man sat on the right of the pic is His Highness Sheikh Mohammed Bin Rashid Al Maktoum, the Vice President and Prime Minister of the United Arab Emirates and Ruler of Dubai.

His son, on the left, is Sheikh Hamdan Bin Mohammed Al Maktoum, the Crown Prince of Dubai, and also the man who uploaded the photo to both Twitter and Instagram.

Over 170,000 people have ‘favourited’ the image over the two sites, alongside the hashtag #Londonunderground, since it was shared on Monday 19th July.

It is not yet known which line the pair travelled on at the time of the picture, yet people have been fast to compliment the duo for their willingness to commute amongst the crowds.

One person wrote on Twitter: “Love it. Sheikh Mohammed, ruler of Dubai and his son take a trip on the London Underground,” whilst another added: “Freaking out? I wouldn’t have looked at them twice. Just two guys on the tube…”

With a wealth in excess of £3 billion – according to Times and Forbes, Sheikh Mohammed Bin Rashid Al Maktoum is a very rich man indeed but has also shown his humanitarian side in recent years.

In 2007, he gifted over £7 billion to set up the Mohammed bin Rashid Al Maktoum Foundation – aiming to support future generations in developing sustainable solutions in the Arab world.

Make sure you keep your eye out next time you hop on the Underground – you never know who you could be sat next to. What next? The Queen on the canal?