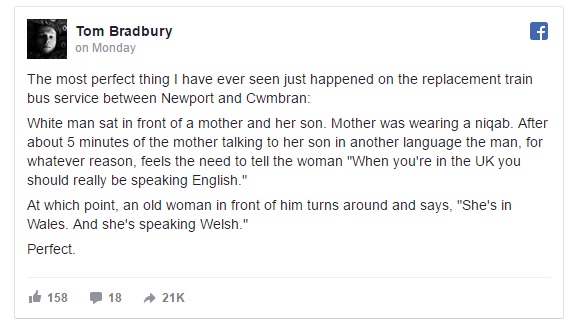 A Facebook post that has gone viral has depicted the moment a Muslim woman in niqab was challenged for not speaking English.

Tom Bradbury, a 26-year-old events organiser, wrote the post which has been shared over 16,000 times.

In the status update he relayed the incident describing how a Muslim woman was playing with her toddler son, speaking to him in a different language while on a rail replacement service between Newport and Cwmbran, in Wales.

Tom described how she was subsequently confronted by a fellow passenger who said, “When you’re in the UK you should really be speaking English.”

Tom wrote, “At which point, an old woman in front of him turns around and [said], ‘she’s in Wales. And she’s speaking Welsh’.”

After his post went viral, Tom said that he was ‘surprised’  to hear the angry passenger ‘come out and say something like that so directly’.

The instigator, Tom continued, ‘seemed to shrivel up a little bit and mumble something to himself, but stayed quiet afterwards’.

Tom said he has heart lots of ‘similar stories from various places’ but that it doesn’t surprise him at all.

“I’m sure similar things have happened all over the world where ignorant people get called out,” he added.