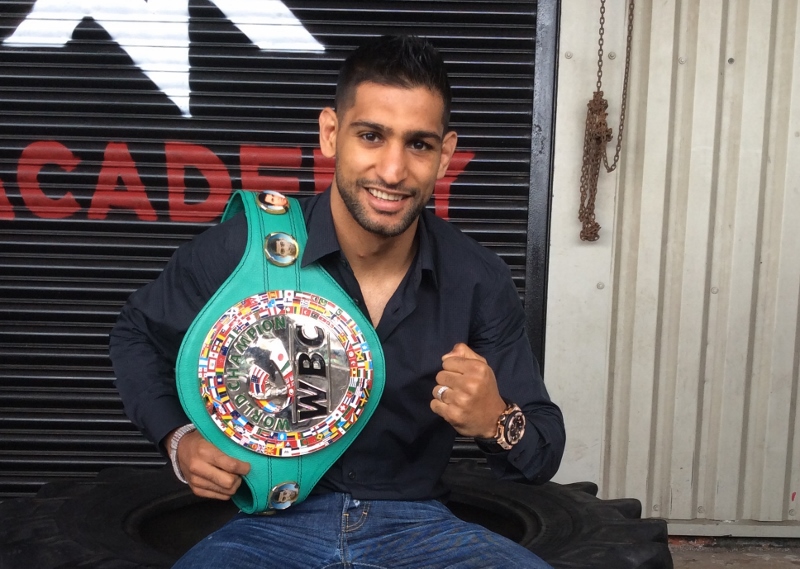 With less than a month to go until Amir Khan’s mega-fight with Canelo Alvarez in Las Vegas, the Bolton boxer says he is 100 per cent focussed on the challenge ahead with no regrets over ‘missed opportunities’.

Back in November, the 29-year-old heavy-hitter was in talks with Manny Pacquiao’s camp about a potential bout for 2016.

However, after those discussions failed to materialise, a Cinco-de-Mayo match-up with Mexico’s Alvarez was cooked up to the delight of the Khan army.

Now, with talks of ‘The Pacman’ possibly retiring following his victory over Timothy Bradley last weekend, Khan could miss out on yet another high profile matchup in the future.

Unlike the fight that never was with Floyd Mayweather, Khan says he holds no grudges against the renowned Phillipino fighter.

He told Premier Sports: “You always want to test yourself against the best and Manny is still one of the best around.

“It’s a fight we tried to make happen between us but for some reason or other it never came about.

“My team met with Bob Arum in London and we had agreed everything but it didn’t happen. It would have been a great fight but we both have other big fights coming up, so we are focused on them.”

Victory on the day would cement his place as one of the world’s most lethal competitors with the WBC World middleweight title on the line.

A host of fighters will undoubtedly be queuing up for a shot at the title, whichever man wins, yet Khan accepts that his potential fight with ‘The Pacman’ may now be over.

“What Manny has achieved in boxing is incredible,” he added. “If he does call it a day, he can look back and be very proud of what he achieved, because very few fighters have done what he has.

“He has been in top fights, won a lot of world titles and has fought for everything to get to where he has, so I have nothing but respect for that.

“It’s clear that he is one of the best fighters of this generation and I wish him nothing but the best if he does end his career against Bradley.”

‘Yorkshire is behind you’