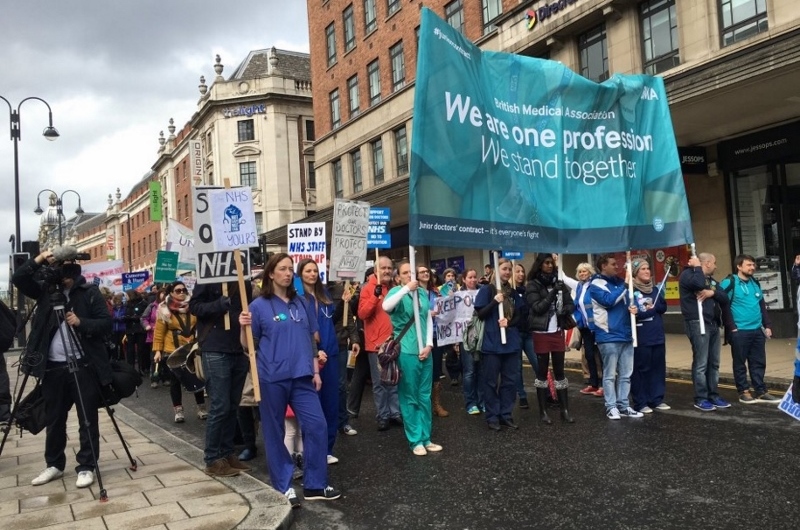 NHS protest in Leeds sees thousands take to the streets

In one of the biggest demonstrations Leeds has seen in years, thousands of people took to the streets to protest against NHS reforms.

City campaign group Keep Our NHS Public organised the march around the city centre, which was supported by junior doctors who are currently embroiled in rows with the Government over pay cuts of up to 30 per cent and the cutting of premium rates for doctors working between 7am and 10pm on every day apart from Sunday.

Rammina Yassaie, a junior doctor from Leeds who joined in the march in a circle around Leeds city centre and Victoria Square said: “We had an excellent turn out at the March in Leeds this weekend, with over 3000 people standing together to fight for their NHS.

“Together, we are demonstrating to the Government that they need to listen to the public and to the concerns of frontline NHS staff.

“It is time for them to put patients before politics and fund the NHS properly. Stretching services out more thinly, and failing to adequately invest in the NHS, is simply going to harm patients.”

The Government decided to impose their contract in February, after Jeremy Hunt’s chief negotiator, NHS hospital chief executive Sir David Dalton, said there was “no realistic prospect of a negotiated outcome”.

Junior doctors fear the new contract will result in staff being unreasonably overstretched in hospitals, putting patients in jeopardy.

Will Sapwell, a junior doctor from Sheffield, made a speech to crowds that had gathered outside Leeds Art Gallery. He said: “If you believe that healthcare is a right, not just a privilege for the rich – march with us.

“If you think your family has the right to be treated by a doctor who is awake enough to do the job – march with us.

His speech continued: “March with us, because the whole NHS is under threat from ministers who are mad, bad or utterly incompetent. Let’s march for what’s right.”

The Department of Health said: “There should never be a choice between providing safe care – our top priority – and balancing the books, which is why we’re investing £10bn to fund the NHS’s own plan for the future, including nearly £4bn next year.

“Despite being busy, the NHS continues to perform well – last year the service performed 1.6m more operations and treated 2,100 more people every day within the four hour A&E target compared to 2010.”

BLACKS SOLICITORS: Landlord’s Consent – a step too far could be...

‘Loss of Control’ Father acquitted of murder after six-month ordeal