The way in which millions of consumers already shop, alongside increasing costs, mean that by 2025, the British Retail Constortium (BRC) has estimated that up to 900,000 jobs will disappear in the retail industry.

With the increase of technology and the rising minimum wage, it is predicted that the retail market will suffer a huge dip in the amount of people that can find work within it.

Currently, the retail sector accounts for 10 per cent of the economy and one in six British employees are employed by British retailers.

Charlie Mayfield, chairman of the BRC and upmarket department chain John Lewis, said: “What matters is who and where will be affected most by all this change. These are the valleys to cross and the path through them needs to be charted with care.”

Sir Ian Cheshire, chairman of Debenhams, agreed with the predictions by the BRC. He said there wasn’t any doubt about the fast changing nature of this sector and that ‘there will be fewer retail jobs in the future’.

Dave Lewis, the chief executive at Tesco, said: “The combination of price deflation, business rate rises and growing labour costs is putting increasing pressure on a highly competitive sector, which is already going through a time of great change.”

The BRC report said: “With the introduction of the National Living Wage, labour costs are now set to rise.”

The new National Living Wage will come into force this April at a rate of £7.20 an hour for the over-25s, replacing the present minimum wage of £6.70 per hour.

George Osborne announced in the post-election Budget last year that it would then increase to £9 an hour by 2020.

The BRC estimates a cost to the industry of up to £3bn per annum. 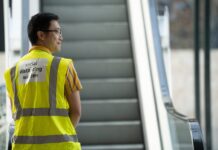