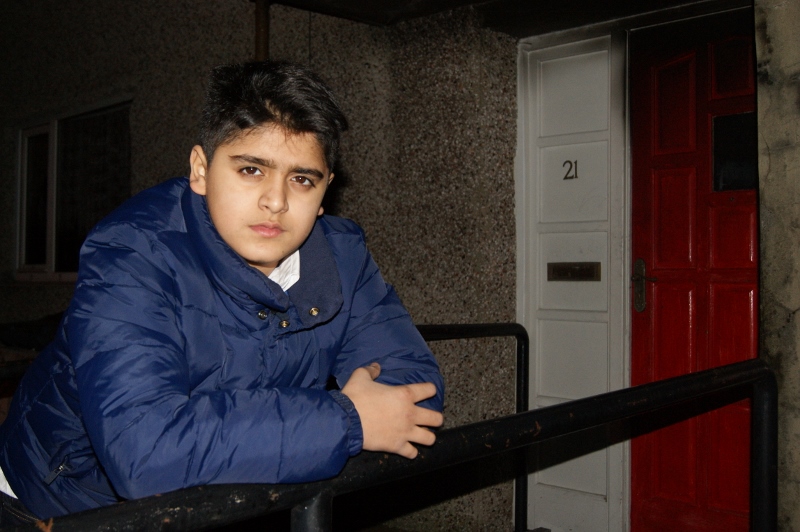 A have-a-go hero from Wyke, whose quick thinking helped save the lives of his friends when a hoverboard exploded in their family home, says he was just doing a ‘selfless act for the greater good’.

Thirteen-year-old Jibril Muhammed Faris, was playing at a neighbour’s house when the hi-tech appliance set alight after it had been charging.

Thanks to the teen’s actions and mature attitude, the family came away with only mild burns instead of severe injuries.

Speaking of the incident, Jibril said: “I unplugged the hoverboard, and turned it on. All of a sudden it started smoking really badly. Then it exploded with a boom.

“My first thought was to get to the door and open it. There was so much smoke that the keys dropped, and I couldn’t see the handle.”

The youngster had the nous to lead his friends Tony Chiem, nine, and his sister Karen Chiem, eight, from the burning room to an upstairs bedroom before calling 999.

Somehow, Tony’s mum Thu Thi Tram managed to open the door and get the trio of kids out of the house, burning her ear on the way out.

The mother, her husband Vinh-Hung Chiem and the children had to be treated for shock and smoke inhalation at Bradford Royal Infirmary – but, thanks to Jibril, escaped without life threatening injuries.  However, the house will need to be gutted and redecorated after the fire.

Sadly, valuables which were not damaged during the fire were stolen in a burglary the same night as the family were being treated at hospital.

Locals have been hailing Jibril as a hero. But he thinks otherwise: “I don’t feel like that. I feel like I’ve just done a selfless act for the greater good,” he added.

Jibril’s dad, Tariq Majid, said his son was still having nightmares about the accident.

He told Asian Express: “As his father, I am really proud of him, especially because he went that little bit further that what was expected of him. He’s still having nightmares about what happened. Last night, my wife told me that he was crying out in his sleep.”

The exact cause of the fire is difficult to confirm due to the fire damage that the hoverboard sustained.

However, the most likely cause is from the overheating of the lithium batteries which have exploded due to them not being configured correctly, or they have overheated to the point of igniting the hoverboard unit’s internal components due to the cut-off switch within the unit failing.

Fire Investigator, Station Manager Mark Helliwell, said: “This must have been quite a scary experience for the children as the fire quickly took hold of the sofa and spread rapidly throughout the living room, which has been left gutted, and the rest of the house is heavily smoke logged.

“The teenager’s quick thinking actions are certainly commendable and he later said that he remembered the Fire Service advice given in his school talk in Year 5.

“Fortunately everyone was able to get out of the house without sustaining serious injury, albeit having suffered smoke inhalation.”

The importers of some models of hoverboards say that their products are not dangerous and are in line with UK and European laws.

National Trading Standards advises anyone considering buying a hoverboard to use its checklist to make sure it is a safe one. Hoverboards are illegal to ride in public, both on roads and pavements, and cheap knock-offs prove to be a fire risk.