Public spending on cyber security would be almost doubled to a total of 1.9 billion pounds over the period to 2020, despite the forthcoming announcment of fresh overall spending cuts.

Osborne, said Friday’s attacks in Paris, which killed at least 129 people and were claimed by Islamic State (ISIL), underscored the need to improve Britain’s protections against electronic attack.

“ISIL are already using the Internet for hideous propaganda purposes; for radicalisation, for operational planning too,” he said in excerpts of a speech he was due to give at Britain’s GCHQ eavesdropping agency.

“It is right that we choose to invest in our cyber defences even at a time when we must cut other budgets,” he said. “The internet represents a critical axis of potential vulnerability.”

The new national cyber security plan drawn up by the government would feature a dedicated force to ensure faster and more effective responses to major online attacks. The force would be based at GCHQ in Cheltenham, southwest England.

Other elements of the plan included possible cooperation between Internet service providers, with help from the government, to fend off malware attacks and block bad addresses used against British Internet users, as well as a new institute to train coders.

Meanwhile, Prime Minister David Cameron has said that the size of Britain’s intelligence agency staff would be increased by 15 percent.

British broadband provider TalkTalk suffered a cyber attack in October which affected 157,000 customers. This month, Britain and U.S. authorities carried out a drill with leading banks to test their response to a cyber incident in the financial sector.

Eat out to help out: Diners to get 50% off in August to boost restaurants 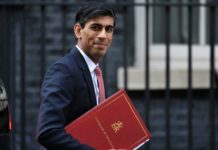 Designed to have the utility of a truck AND performance of...

Cutting benefits down to £20k: Many households may be plunged into...