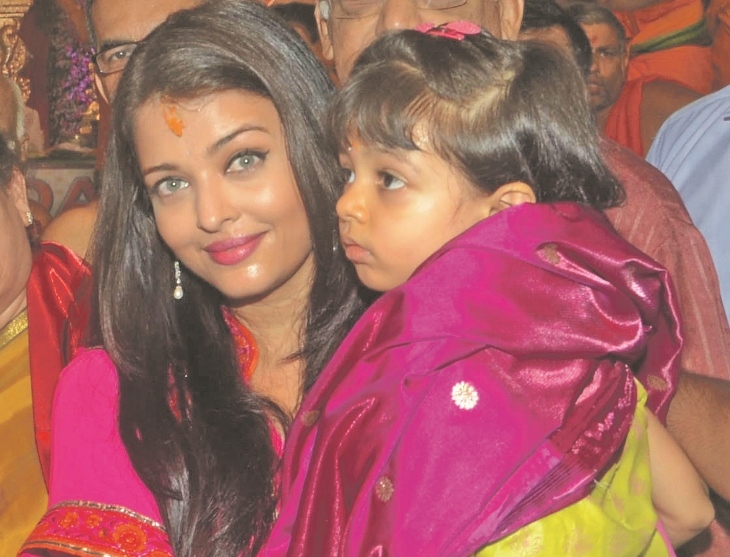 Vinayak Chaturthi, the Hindu festival celebrated in honour of the elephant-headed god Ganesha, has been celebrated with its affiliated vibrancy all across the world.

The modern-day version of public celebrations in India involves installing clay murtis (idols) of Ganesha in public pandals (temporary shrines) and worshipped together for ten days. It’s not uncommon for some murtis to scale to 70 feet in height.

But in Mumbai, there is a special spirit of oneness when you see Bollywood stars join the excitement, visiting the famous Siddhivinayak Temple to take part in the ‘aarti’, like any commoner. Aarti is a Hindu religious ritual of worship, a part of puja, in which light from wicks soaked in ghee (purified butter) or camphor is offered to one or more deities.

The 10-day festival kick-started on 17th September whilst the grand immersion took place on 27th, after which the idol is immersed into water.

It was adorable to see their little ones joining them, showing great composure while partaking in the prayer ceremonies.
Aishwarya Rai Bachchan was spotted with her daughter Aaradhya at the GSB Ganpati pandal. The three-year-old looked the absolute spitting image of her mom.

Sanjay Dutt and Manyata Dutt’s four-year-old twins – Shahraan and Iqra offered pooja to Lord Ganesh in the presence of their parents before the immersion of the idol in a tank at their residence. The twins will turn five this October, and Shahraan already has grown taller than his sister Iqra.

Shilpa Shetty and Raj Kundra took their little boy Viaan for the immersion. Raj carried his son on his shoulders while Shilpa danced along with the crowd.

Meanwhile Rishi Kapoor and Neethu Singh were joined by their daughter Riddhima and granddaughter Samara while offering prayers at a temple.

Akshay Kumar son Aarav, who turned 13 recently, joined his mum Twinkle and grandmother Dimple for a procession before offering the prayers and immersing the idol in the sea.

Sonakshi Sinha: “I was hefty and overweight as a kid”