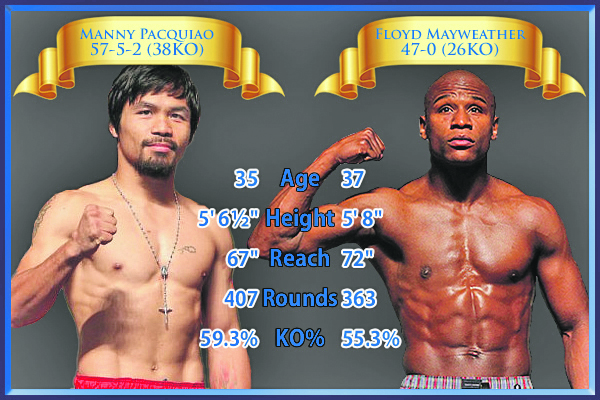 Floyd “Money” Mayweather Jr who demands approximately 40 million pounds per fight and is probably the greatest technical boxer to have ever lived has avoided the question of fighting his biggest rival Manny “Pac Man” Pacquiao since 2009 when it was first touted.

Mayweather Jr has previously blamed Pacquiao’s boxing promoter claiming he is not willing to make the fight happen, Pacquiao making unreasonable money demands in terms of fight revenue and accusation that Pacquiao has used illegal sport enhancing drugs as justification for the fight not taking place.

However Mayweather Jr has now dropped the biggest hint that he finally wants to end his spectacular career with a fight against Pacquiao.

“The Fight of the Century”.

It would seem that the biggest obstacle for this fight not to take place has been the financial split between the fighters and since Mayweather Jr’s demands have now been met this fight is closer to happening now than ever before.

I personally do not believe that Mayweather Jr can be belittled about his financial demands in regards the Pacquiao fight since he sells more pay-per-views sales that any other fighter in the world and is also the undefeated fighter.

The fight itself could generate Mayweather Jr and Pacquiao more than 120 million pounds in revenue and this fight is already being considered as the biggest fight ever in the sport of boxing.

The Mayweather Jr v Pacquiao fight is well overdue with both fighters now showing more signs of vulnerabilities in terms of boxing ability that comes natural with age. The time is now and it is better late than never to finally get this fight deal done and give the fight fans what they want to see.

The final decision now lies in the hands of one man Floyd Mayweather Jr.

Magic Man’s memorable 2017 in the ring

Mayweather protege Davis out to prove why he’s the next boxing...

“AND THE NEW… CHAMPION OF THE WORLD TYSON FURY”