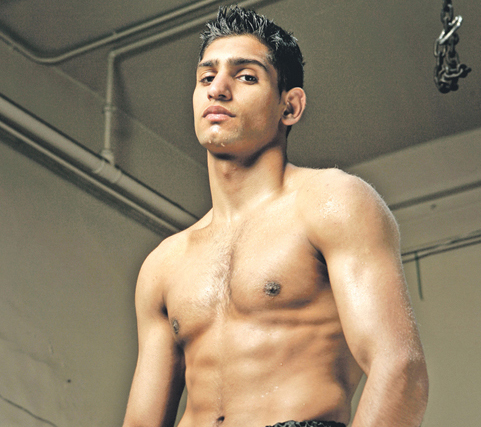 When Amir ‘King’ Khan’s shot at a blockbuster bout against Floyd ‘Money’ Mayweather was finally dismissed, the Bolton boxer was left in limbo, with no match, no million-pound contract, and no idea what was going on.

Khan had topped a fan’s poll to see who Mayweather should fight next yet it was the impressive Marcos Maidana who got the shot after a convincing victory over Adrien Broner in December.

Having already cancelled his December clash with Devon Alexander, and in turn losing the chance to pick up a World Championship, the Brit was forced to find a new opponent.

Step forward, WBA International Welterweight Champion Luis Collazo. The man who suffered a split decision defeat in Ricky Hatton’s Welterweight debut will take on Khan in his weight class bow, next month in Las Vegas on the undercard of the Mayweather and Maidana fight.

It will have been more than a year since Khan stepped foot in the ring when he appears in Vegas on the 3rd May at the MGM Grand Garden Arena, yet he says he is determined to prove himself worthy of a match-up with Mayweather.

“I’m looking forward to fighting in Las Vegas once again, and my intention…is to make a statement that I belong on this big stage,” said Khan.

“Luis Collazo might be coming off of a big win, but I am in incredible shape and am ready for this challenge. A win on 3rd May is what I need to prove that I truly am one of the best welterweights in the sport.”

Victory over the Brooklyn native Collazo, who has 35 victories (18KO) and five losses, would surely put Khan back in the sights of Mayweather yet he insists the potential match will only happen when he is ready.

“I do regret a few things and I should have taken the [Devon] Alexander fight because I’d have been a world champion now,” said Khan.

“Then the Mayweather fight fell through. I should have got one more fight in and it’s a mistake that I will never make again.

“Mayweather decided not to take the fight with me, probably because he thought I would be the first to take away his unbeaten record, and is now fighting somebody I’ve already beaten. I think the fight with Mayweather will happen one day but I’m not rushing and it will happen when I’m ready.

“I’ve spoken to Floyd on the phone and he’s told me it’s nothing personal and he still wants to fight me. The whole thing has improved me physically and mentally and I am ready to come back.”

Before anything can even begin to materialise for Khan’s future matches he must first overcome the tricky obstacle which is Collazo.

Having taken nearly two years off from the ring, the welterweight champ made his return in 2011, and has won five of six bouts, including four straight.

This past January, he made the statement of a lifetime with a blistering second-round knockout victory over favoured, former world champion Victor Ortiz, and he says he has similar plans for Khan in May.

“Defeating Victor Ortiz in January was just the beginning,” said Collazo. “Facing and beating Amir Khan on the biggest stage in the sport is a once in a lifetime opportunity.

“I will take full advantage of this and put myself in the best position to face the winner of the main event. I hope Khan is ready because Brooklyn is coming to take him down.”

Amir Khan will take on Luis Collazo on the 3rd May at the MGM Grand Garden Arena, Las Vegas, in what is sure to be one of the most anticipated ‘undercards’ of recent memory.

Promotors bounce back in style