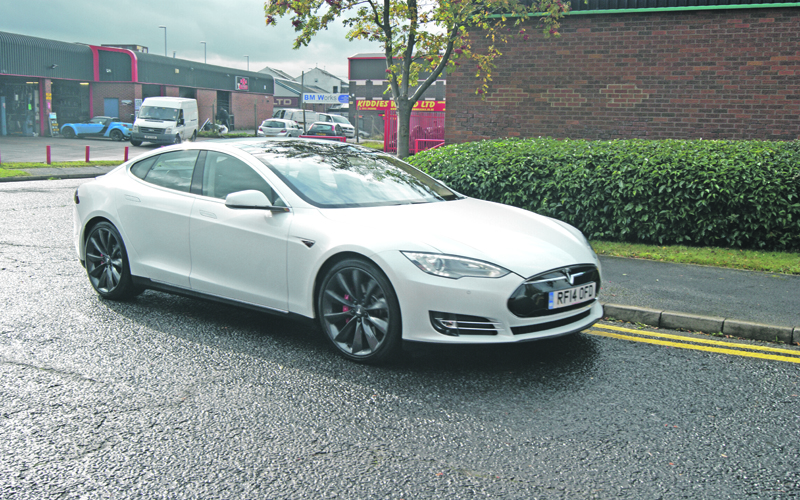 Over the past decade, Tesla Motors have been at the forefront of electric vehicles, developing incredible cars which are helping to accelerate the world’s transition to sustainable transportation.

The latest motor to arrive from the Tesla production line is a car so advanced; it sets the new standard for premium performance.

The Tesla Model S has been designed from the ground up as an electric vehicle, taking performance to the next level and beyond.

Equipped with an 85 kilowatt-hour battery and high performance drive inverter, Model S accelerates to 60 miles per hour in just 4.2 seconds, guaranteed to deliver both unprecedented range and a thrilling driving experience.

With a rigid body structure, nearly 50/50 weight distribution, and a remarkably low centre of gravity, Model S offers the responsiveness and agility expected from the world’s best sports cars whilst still providing the ride quality of a saloon.

Every millimetre of Model S is designed to reduce drag. The door handles are no exception. When not in use, the handles retract into the body, streamlining airflow. When a driver approaches the vehicle with the key, the handles slide out and unlatch with a simple touch.

Model S is not simply a car designed with the environment in mind, it is also a driver’s car. Behind the wheel, the combination of meticulous noise engineering, alongside Tesla’s uniquely quiet powertrain, creates the sound dynamics of a recording studio.

Model S drivers can listen to any song they want with a choice of HD radio, online radio, on-demand internet radio and Bluetooth or USB audio devices. Planning ahead is made easy with Google Maps which offers live traffic information and allows you to visualise the cars energy consumption instantaneously. When reversing, drivers can see behind the car with the industry’s first full HD backup camera which is optimised for ultimate visibility and safety.

The Model S has an unbeaten EV range of up to 312 miles, meaning long distances in an electric vehicles are no longer out of the question. Most customers will charge mainly at home, waking up to a completely recharged battery, giving owners the option to travel for free between cities along well-traveled routes in Europe.

Superchargers provide half a charge in as little as 20 minutes and are strategically placed to allow owners to drive from station to station with minimal stops.

Travelling with the family or plenty of luggage is no problem in the Model S. The car comfortably seats five adults and the rear facing seat option provides additional seating for two children.

The unique architecture of Model S even creates unprecedented storage space with up to 63 cubic feet of possible storage to be utilized. Whether you are a mountain-biker a surfer or just a big shopper, all your items and more can be safely stored in the vehicle.

With sustainable transportation at the heart of everything Tesla produces, the Model S looks set to become the benchmark for other car manufacturers to follow when producing exciting electric motors.

Asian Express Managing Director, Nadim Hanif, got his hands on one of the world’s first Tesla Model S motors last week and gave his review on an ‘incredible vehicle’.

To have now had this first-hand experience of the Tesla S, and as a self-confessed car enthusiast myself, I can honestly say that this is possibly the best car I have ever driven.

This particular model is the top of the range, and is priced at £100,000, which may sound expensive, but you basically start saving money from day one.

Why do I rate it so highly? It’s quiet, smooth and absolutely seamless, with no gear changing needed. Simply get in and go – it’s like switching your TV on and off.

The car drives like no other I have ever been in before, going from 0 – 60mph in just four seconds.

Yes, it’s smooth, and its handling is like that of a thorough-bred supercar – the cornering is like a four-wheel-drive whilst the grip is absolutely amazing.

I must also confess that the 50/50 weight distribution is almost identical to that of my own personal 2013 BMW M5 and that, for me, is about the best car in the world.

I got used to the fact that there was no sound of the engine yet I’m sure the Speedo was telling fibs at times, as all too often 40mph felt like 20mph.

As for the looks, they were very much deceiving with some people comparing it to a Maserati and others being left dumbfounded by this incredible car in front of them.

Either way it looked slick and stood out from the crowd. It looks better than the majority of four-door cars that you see on the road, and it could even pass as a coupe model – that’s how nice it is.

Look inside the Tesla and a massive interactive console is on hand with easy access, leaving all passengers, and admittedly myself, to just sit back and say ‘wow’.

It’s basically an iPad fitted in to the cockpit, in fact it’s bigger than an iPad and it’s faster too. The screen had Google maps, full internet access and can be used as a big screen reversing camera.

Everything was controlled via this touch screen whether you needed to lock or unlock the doors, or even lower the suspension; you had all the controls right in front of you.

The car is also very spacious, similar to the feel of a Big Range Rover Vogue, with plenty of head room and even more leg room which even the back seat passengers can take advantage of.

Over all this 100K motor would save money every day:

4. Services cost next to nothing

The only downside is that you would have to work out the mileage of your trip in advance to see if would get to your destination and back. If not, I suppose you could always call at any service station and charge up whilst having a cup of coffee.

Basically, the Tesla S is an incredible motor.