There’s a new funny man on the block who’s rapidly building a pretty decent bank of fans and respectable reputation in the world of stand up comedy.

29-year-old Aatif Nawaz from Wembley, to the complete horror of his close friends and family, left his stable well-paying job in IT to try his hand at making audiences laugh.

Having toured The Netherlands, Ghana and Pakistan whilst performing alongside the likes of Shazia Mirza, Omid Djalili and several other comedy veterans, Aatif is quickly become one of the most popular British-Asian comics in the UK.

Convinced that people would relate and warm to his refreshing take on ‘desi’ life and his twist of social and cultural observations, Aatif says that Asian audiences today are different to what they used to be.

“Gone are the days when comedians could get away with just wise cracks on stereotypes of Asian people and repeating stuff which is resonant of ‘Goodness Gracious Me’ days,” says Aatif speaking to the Asian Express.

“Audiences are smarter now and much more wised-up on stand-up comedy, and so the material has to be new, well thought-through and completely, completely original.”

Encouraged by the response from an all sell out debut 60-minute show in January, Aatif, earlier this month returned to the Leicester Square Theatre for more rip-roaring antics. His performance titled ‘Talk Roti To Me’, written by himself, tells the hilarious tale of a British-Pakistani’s journey to the world of stand-up comedy.

A trained actor, Aatif has also made appearances in several commercials and television shows. He has had small roles in Mark Austin’s ‘Real Crime’ and ‘Peep Show’.

In 2012, Aatif won an Honourable Mention Laural at the Los Angeles Movie Awards for his documentary ‘Postcards from Lahore’.

The film also holds the distinction of being the only Pakistani film to be screened at the 2013 Cannes Film Festival.

Now Aatif is currently in discussions with various theatres and venues about taking his show on the road, specifically in Birmingham, Manchester, Cardiff and Leeds.

He’s also involved with a independent British film project which we will keep you posted on. Watch this space… 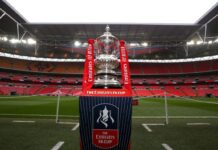 Fans will return to Wembley

DOABM: YouTube star Humza teams up with the police to prevent...

Fans will return to Wembley