There are over 80,000 hospital admissions in England each year for heart attacks, and at least 7 out of 10 people survive. The NHS says this figure can be increased to over 9 out of 10 (94%) for those who reach hospital and receive appropriate treatment early.

The risk of having a heart attack is also increased by smoking, a high fat diet, diabetes, high cholesterol, high blood pressure, and being overweight or obese.

Signs to look out for

Consultant Cardiologist Dr Deoraj Zamvar from Yorkshire says the risk of having a heart attack in first generation South Asians is up to 50 per cent higher than the local population.

“Heart attack can be the first sign of heart disease in some individuals,” says Dr Zamvar.

“They may have classic symptoms such as chest pain that can be described as a feeling of tightness, pressure, heaviness, or a squeezing across the chest.

“It can feel like the pain is spreading from your chest to your arms (usually the left arm, but it can affect both arms), jaw, neck, back and tummy.

“People may experience shortness of breath, sweating, dizziness or light headedness or nausea an overwhelming feeling of anxiety or unease – similar to a panic attack. The chest pain is often severe, but some people may only experience minor pain, similar to indigestion.”

Particular concerns have been raised about women delaying accessing care – whilst men are more likely to recognise the symptoms of a heart attack, women may dismiss symptoms. Women’s risk of a heart attack increases after the menopause, so it’s really important to take these symptoms seriously.

“While the most common symptom in both men and women is chest pain, women are more likely to have other symptoms such as shortness of breath, feeling or being sick and back or jaw pain.

“When a person has signs of a heart attack, he or she should immediately call 999 and describe the symptoms,” adds Dr Zamvar.

“Heart attack is caused by blockage of the blood vessel (coronary artery) that supplies blood to the heart muscles. The longer the time between onset of symptoms of a heart attack and receiving treatment, the poorer the chances of recovery.

Symptoms of a heart attack can include:

• chest pain – a feeling of pressure, heaviness, tightness or squeezing across your chest
• pain in other parts of the body – it can feel as if the pain is spreading from your chest to your arms (usually the left arm, but it can affect both arms), jaw, neck, back and tummy
• feeling lightheaded or dizzy
• sweating
• shortness of breath
• feeling sick (nausea) or being sick (vomiting)
• an overwhelming feeling of anxiety (similar to a panic attack)
• coughing or wheezing
The chest pain is often severe, but some people may only experience minor pain, similar to indigestion.
While the most common symptom in both men and women is chest pain, women are more likely to have other symptoms such as shortness of breath, feeling or being sick and back or jaw pain.

“I’m not going to let a heart attack stop me”

Rifhat Malik, a devoted and tireless charity fundraiser from Leeds says that despite having a heart attack she’s determined to fulfill the obligations that she’s made to helping feed those on the poverty line, the homeless and refugees.

She was at a local gym teaching Zumba, and began to have signs of a heart attack, but initially dismissed them as she felt her symptoms weren’t bad enough to call the paramedics.

Many people dismiss the early signs of a heart attack, but it’s important to take them seriously and call 999.

“I had chronic fatigue and a little indigestion type pain in the middle of my chest but not enough for me to stop exercising,” she says.

“At the time it was Ramadhan and I simply put my symptoms down to fasting,” says Rifhat.

“My friends kept on remarking on the colour of my skin saying I looked pale. So I asked my friend to take me to A&E at the Leeds General Infirmary (LGI) to get checked out.”

Rifhat was admitted to Leeds General Infirmary with indigestion-like pains and chronic fatigue.

“I explained that I had a very strong history of heart disease within the family and that most of them have died of Cardiac related health issues and I was checked in and told to sit in the waiting area until I was called in.

“I had ECG, chest Xray and blood tests to check for raised troponin, which is the enzyme which is released if you are having a heart attack.

“The blood test came back with raised troponin, so they admitted me and carried out an Angiogram which showed my right coronary artery 99% blocked so they inserted two stents. “I believe I am very lucky to be alive. The care I received at LGI was incredible, and my friends and family were an amazing support.

“Yes my life has been impacted by the heart attack, and I know I’m lucky to be alive – my parents and my younger brother are no longer here due to heart attacks.

“Please don’t dismiss the early signs of a heart attack, it’s never too early to call 999 and describe your symptoms.”

Call 999 immediately if you think someone might be having a heart attack. The faster you act, the better their chances. For more information visit: nhs.uk/heartattack 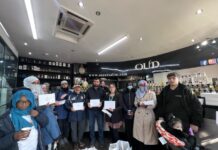 The sweet aroma of Ramadhan

Over 1 million people now diagnosed with diabetes across the North...

Tax Credits and Child Benefits payments could stop for some claimants...