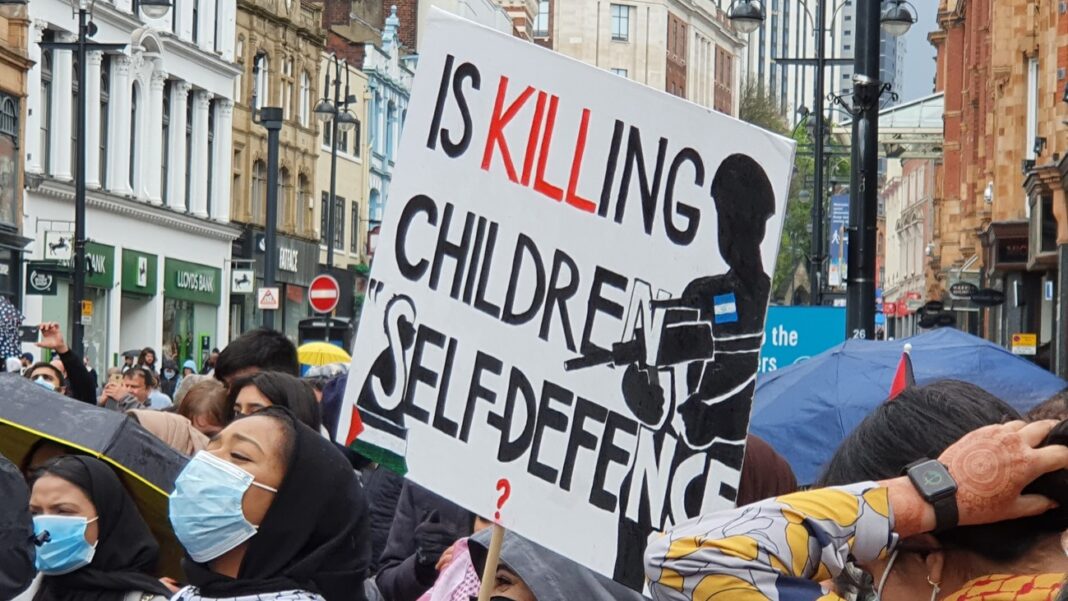 “Last weekend, I went on the Leeds rally to help spotlight the massive injustices being done to Palestine by Israel – injustices that have been carried out for decades.

Similarly to how the tragic death of George Floyd became a powerful catalyst for the Black Lives Matter movement, the Israeli government’s increasing amount of aggression against – and allowing downright theft from the Palestinian people, reached a tether during the month of Ramadan.

As numbers currently stand (Thursday 20th May), 230 Palestinians have been killed, including 65 children; and 12 Israelis, including two children.

Earlier this week, President Biden vetoed a UN statement for immediate ceasefire in Gaza for the third time in a week. The next day, his administration approved a $735 million arms sale to Israel.

Rocks and rockets versus Israeli airstrikes and an Iron Dome Defence System. As much as mainstream media would like to convince you, this isn’t a war of equals.

The injustice makes my blood boil, and though I’ve spoken out about it from time to time, the fear of being labelled antisemitic has made it difficult to express myself fully.

In December 2016, the ‘flimsy’ definition of antisemitism in regards to criticising Israel has pushed many into silence.

This wasn’t helped by the strong hand dealt to socialist Labour MPs supporting Palestine, often accused of antisemitism for something as little as retweeting an article on voting Tory instead of Labour, with one sentence incorrectly claiming that American police forces learnt to kneel on the neck from Israeli secret services. Without conflating Israel with all Jewish people, how was this antisemitic?

But attending the Palestine rally last weekend, it was difficult not to notice that 90% of the crowd were either Arab or Asian.

It was difficult to ascertain if they were all Muslim, but when the figureheads of the rally shouted “Takbir!” commanding the chanters to claim “Allah hu Akbar!”, it made it pretty apparent.

The speeches from the likes of Labour MP Richard Burgon were welcome, but sadly inaudible if too far out. Stronger loudspeakers next time please!

Despite the horrible grey skies and incessant downpour, the crowd was very friendly.

The chants were empowering on the whole, but the calls to shout “God is Great” in Arabic was a huge misstep. This isn’t/shouldn’t be a Muslim cause. Anything that alienates parts of the crowd will push people away, and this cause needs all the help it can get.

We can but try. Like BLM, this must be a movement, not a moment. We must keep ourselves and others correctly informed. Ignorance may be bliss, but that makes you no less ignorant.

No flood defences is indefensible