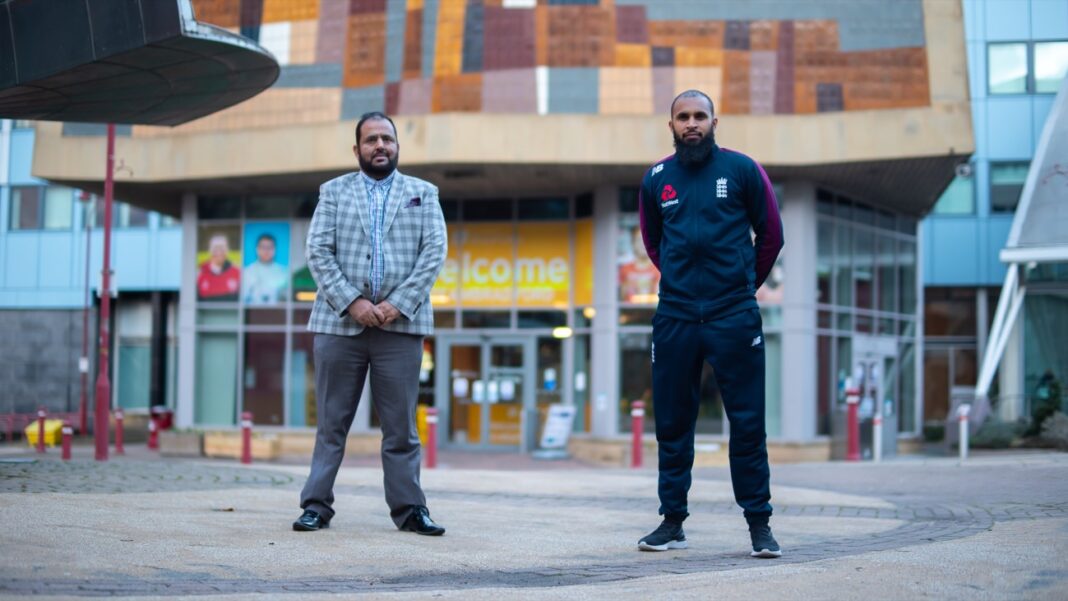 Bradford born and bred cricket star Adil Usman Rashid, and his uncle Javed Bashir – a community ambassador, have both been honoured by the University of Bradford

Yorkshire and England cricket star Adil Rashid and community ambassador Javed Bashir (who also happens to be his uncle) have both received honorary doctorates from the University of Bradford.

Adil Usman Rashid was born in Bradford in 1988 and is only the third Yorkshire-born Asian to play first-team cricket for Yorkshire and the first of Pakistani origin.

He is now considered to be one of the world’s best spinners and is a firm fixture in England’s one day and T20 teams. He played a big role in England’s world cup success in 2019 and on June 21, 2019, in the match against Sri Lanka, he played in his 150th international match for England.

Commenting on his award, he said: “It is a great honour to receive this. I also send my congratulations to students graduating this year. My advice to you is make sure you give 100 per cent and have a positive mindset in all walks of life, because anything is possible.”

His doctorate is in recognition of his outstanding career in sport and his services to the communities of Bradford, including supporting activities that provide opportunities and improve the lives of young people.

Alongside his career in cricket, he runs the Adil Rashid Cricket Academy, with his brother, to inspire more children to get into sport and is an ambassador for the Overseas Plastic Surgery Appeal (OPSA) charity, which provides free facial surgery for poor children and young adults in Pakistan.

“My advice is: Make sure you give 100 per cent and have a positive mindset in all walks of life, because anything is possible.” Adil rashid

Joining him this week is his uncle and community activist Javed Bashir, who is honoured for his service to the community during the Covid-19 pandemic and his unstinting support to the University of Bradford.

Javed Bashir is the founder and CEO of the Professional Muslims Institute, Safeguarding Consultant for the Strengthening Faith Institutions (SFI) and has played a pivotal role in promoting better understanding, integration and community cohesion in the City for many years.

During the Covid-19 lockdown, Javed teamed up with different faith communities to set up the Volunteering Interfaith Partnership in collaboration with Age UK Bradford & District and SFI. Together they responded to the urgent needs of elderly, vulnerable and isolated people by providing hot meals, welfare packs, help with shopping and collecting prescriptions and provided food to the NHS working on the frontline.

In 2018, Javed was included in a publication honouring the highest levels of achievement in the Muslim 100 Parliamentary Review and was awarded the Unsung Hero award by Keighley MP Robbie Moore for his innovative work in bringing faith groups together to help others.

He said to graduates: “As many of you will be entering the real world of work, life may be quite different from here… you may face obstacles, barriers and challenges. Climbing the ladder of success is not going to be an easy task… the fear of failure keeps people from succeeding. You have to fail first, fail often to rise up the ladder. Always remember before you even learned to walk you learned to fall.”

He added: “If you win and become successful, always remember the people who helped you, no matter how talented you are and irrespective of the heights you have climbed. It wouldn’t have been possible without the help and support from others. Never forget where you started and never say good-bye to your people and your community.”

As part of the University of Bradford’s Winter 2020 Virtual Celebrations, they will continue the tradition and award Honorary Degrees and Fellowships to more outstanding individuals.

Working with families at the edge of crisis

Bradford University students call for Imran Khan to be sacked as...