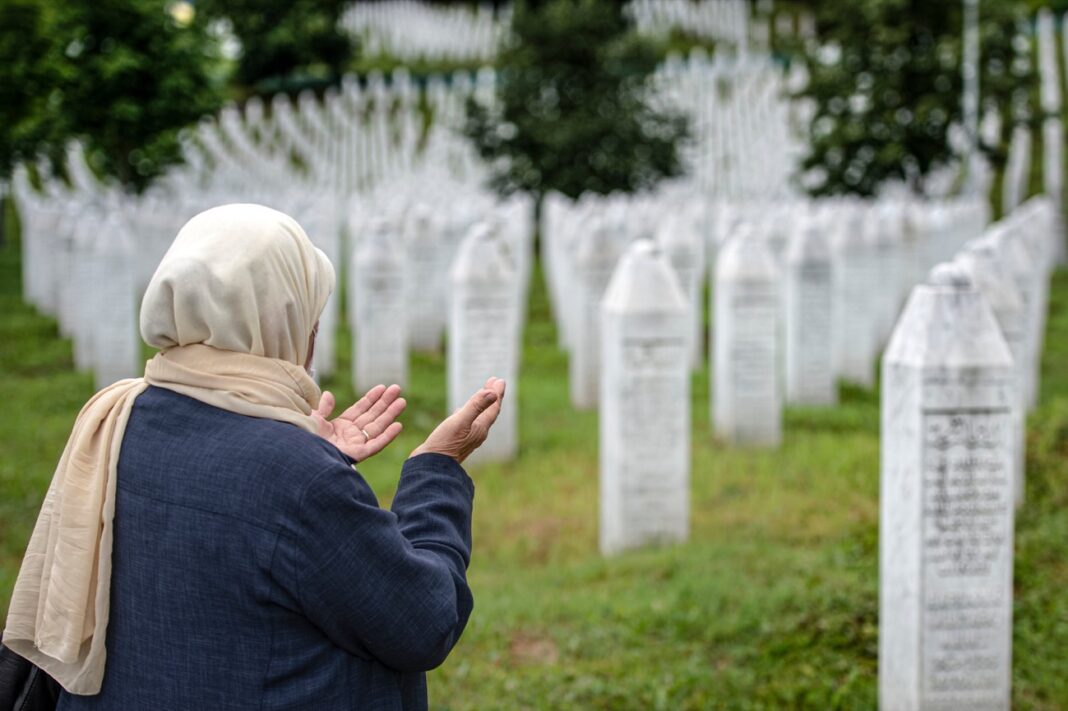 Fifty years after the world said “Never Again” to the horrors of the Holocaust, genocide took place on European soil.

The name Srebrenica has become synonymous with those dark days in July 1995 when, in the first ever United Nations declared safe area, thousands of men and boys were systematically murdered and buried in mass graves.

The victims, predominantly Muslim, were selected for death on the basis of their identity. This was the worst atrocity on European soil since the Second World War.

Although Srebrenica is the only mass killing in Balkan wars that has been officially ruled as genocide by the international courts, this atrocity was only the final act in a much broader genocidal strategy – euphemistically dubbed “ethnic cleansing”.

The genocide in Srebrenica

On 11 July 1995, Bosnian Serb General Ratko Mladić and his forces seized the eastern Bosnian town of Srebrenica, which had been declared a UN “safe zone” in 1993. Over the following week, 8,372 Bosnian Muslim men and boys would be murdered simply because they were Muslim.

Mladić’s forces systematically separated men and boys (as young as 12 years old) from the women and took them away to be killed.

The Srebrenica genocide was the planned, systematic, and industrialised conclusion of a four year campaign of forced deportation, torture, mass murder and systematic sexual violence by Bosnian Serb forces in service of their goal to create a “Greater Serbia”. Some Bosnian Serb historians and politicians continue to deny that genocide and ethnic cleansing took place.

Now the first ever virtual art exhibition using the testimony and artifacts from Bosnian Genocide survivors has being unveiled as part of the 25th anniversary commemorations.

Bosnians and Herzegovinian’s across the world submitted their stories, pictures and personal items to create a unique virtual exhibition called Remnants of Genocide created by UK charity Remembering Srebrenica.

The exhibition is one of the highlights of Srebrenica Memorial Week, July 5th – July 12th, which the charity had to radically alter after more than 2,000 events were cancelled due to coronavirus.

Remembering Srebrenica operations manager Arnesa Buljušmić-Kustura, along with Amra Mujkanovic, has curated the Remnants of Genocide exhibition which has more than 45 stories, paintings, photographs and items relating to the war, genocide and its aftermath.

She said: “We wanted the tell the story of the Bosnian Genocide using survivors experiences creatively instead of forcing them to unload their trauma in a distressing way.

“25 years ago the worst atrocity on European soil since World War Two occurred and it happened in our life time but there is a shocking lack of discussion about the genocide.

“This exhibition has first hand testimony which shows the horror of genocide but more importantly the stories are personalised, they show these victims were humans with lives ahead of them, with hopes and dreams and were not just numbers and statistics of people killed.”

She added: “This is the first time a virtual exhibition has been done with genocide survivors but it has been a healing process through art.

“The most difficult part has been reading really traumatic experiences and coming to terms with the horror which happened in our lifetime, however, allowing survivors the platform to share has been very rewarding.”

She added: “We had submissions from across the world including the United States, Bosnia and Herzegovina, the UK, Austria and even the United Arab Emirates and there were so many we could not include them all.

“However, the beauty of this being a virtual is we can add more items and stories as the years go by, it will be a permanent exhibition which will also act as a learning resource for people across the world.”

Items in the exhibition include poetry, paintings, stories and a teddy bear which helped give a child experiencing trauma a small shard of normality during the war.

The vast array and variety of personal stories will help ensure the tragedies in Srebrenica, Sarajevo, Mostar, Prijedor, Foca, Visegrad and elsewhere in Bosnia will never be forgotten.

Accountancy apprenticeship adds up for Fahad