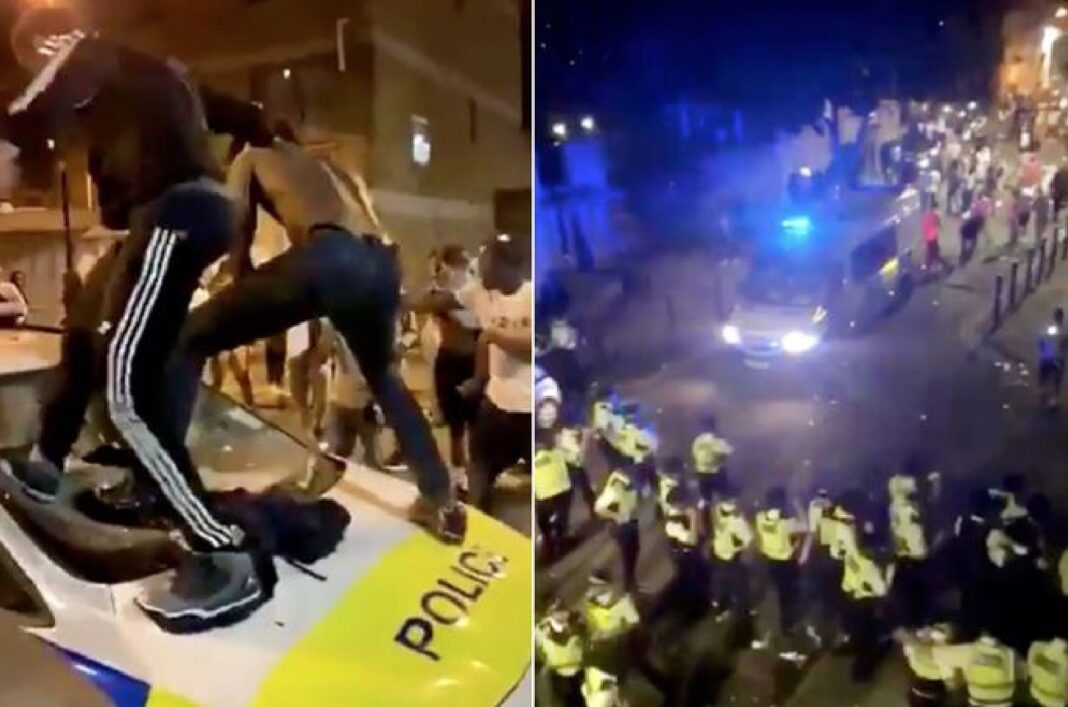 Social media footage shows a line of police retreating from hostile crowds of people charging at them with makeshift weapons on Overton Road near the Angell Town estate in Brixton.

Police said concerned residents called them to the illegal street party on the evening of Wednesday, 24th June after multiple reports of a large unlicensed music event in the street.

Officers attended to encourage the crowd to leave the location, but this resulted in beer bottles thrown at the officers.

The event continued, and more officers attended the scene, and the group became hostile towards officers.

A Dispersal Zone was authorised under S35 of the Anti-Social Behaviour Crime and Policing Act 2014 to encourage crowds to leave.

In total, 15 officers were injured, and two required hospital treatment.

A number of police vehicles were also damaged. Footage shows people climbing on top of vehicles and smashing windscreens.

Four arrests were made for assault and public order offences. They remain in police custody.

After the police left the area, footage showed some of the crowd fighting each other.

BCU Commander Colin Wingrove said: “Our role is to protect the public and ensure guidelines are adhered to in order to prevent the spread of Covid-19 protecting the NHS and save lives.

“Our officers work incredibly hard to engage and explain the public health message and regulations to prevent such gatherings occurring.

“Last night we received numerous concerns from residents complaining about a large gathering, noise, anti-social behaviour, and violence. Officers responded to those concerns.

“These gatherings are unlawful, as well as posing a risk to public health and against coronavirus restrictions.

“The violence shown towards officers is totally unacceptable and we will not tolerate it in any form.

“An investigation into the incident is now taking place and those involved will be brought to justice.”

Is the jab safe for children? Top paediatrician answers your questions...