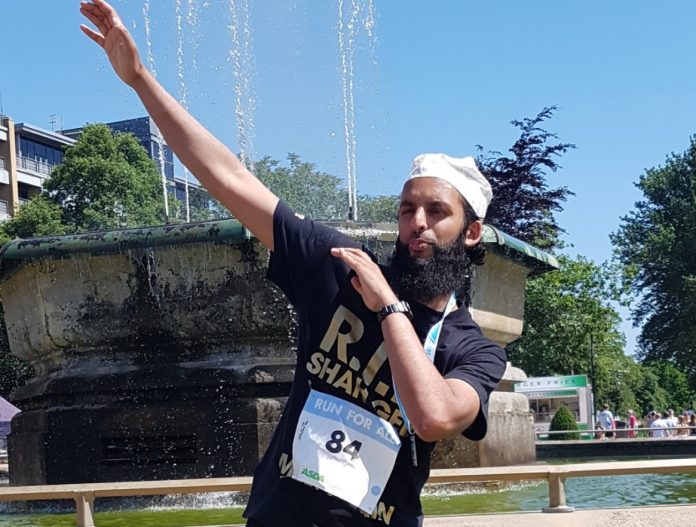 A Bradford man, hailed the ‘Ramadan Runner’ is ready for his seventh consecutive 10k annual run during the month of Ramadan.

Nazim Ali, will be taking on the physically daunting task of running 10,000 kilometres (6.2 miles) all whilst fasting for 18-hours. His run will take place on Sunday 17th May as part of his on-going mammoth fundraising efforts.

Known as something of a legend, this proud Bradfordian celebrated his milestone achievement of crossing £200,000 in November last year. Since then, Nazim has pushed that fundraising figure to an awe-inspiring £250,000.

Nazim, a school careers advisor who works at three inner-city schools, has always devoted annual leave for voluntarily dedicating himself to charitable causes.

Being at the forefront of community and humanitarian initiatives on local, national and international levels, Nazim’s work has not gone unrecognised and he’s received numerous accolades and media coverage for his charity work over the years.

Not only has he crossed that threshold – he’s smashed the Ramadan fundraising figure over £125,000.

Some of the new monies he has raised has gone towards delivering the annual Ramadan food parcels via the Green Crescent UK Malawi team in April.

Nazim says: “During this Ramadan I am aiming to raise funds to support the rebuild and repair of 33 badly damaged homes in Malawi.

“In October 2019 I visited Malawi, the world’s third poorest country, and was shocked by the sheer mass scale of the poverty I witnessed.

“Families are living in squalor. They walk miles to get clean water, children are visibly malnourished with often no footwear and lack of clothes. Homes have very few, if any, food items.

“The monies will go towards assisting Malawian widows, single mothers and impoverished families.

“As ever I will keep you updated of daily progress on my social media platforms – transparency and accountability is at the heart of my success thus far.”

“That includes the installation of a metal roof, plastering, re-build – where required, repointing and painting.

“We’ll also be adding commemorative plaques bearing the names of those who donate the full amount for each house.”

Nazim cogitates helping those in need as his “religious obligation as a devout British Muslim”.

“I am eternally thankful to the donors for their kind donations and on-going support, which is very humbling.

“It is because of you I am able to do what I do, and all this would not be possible without you. God bless you all!”

Nazim adds: “The Asian Express newspaper has kindly featured my community and humanitarian initiatives consistently for over a decade now.

“I recall from 2008 onwards they featured the annual ‘Bringing Communities Together’ football tournament.

“Ever since, they have provided me with exposure whether that be for my charity runs, feeding the homeless, providing toys to poorly children at Bradford Royal Infirmary Children’s Wards or my numerous humanitarian aid trips abroad.

“Exposure through the Asian Express newspaper has allowed me to raise thousands of pounds for a plethora of causes as well as inspire others.

“I’ve received enquiries from Asian Express readers on how they can donate, and more importantly how they too can support community and charitable causes in their localities.“

“I am grateful to the Asian Express for their on-going support – it is not often a newspaper provides sustained support to individuals trying to make their humble contribution both at home and abroad.

To sponsor Nazim Ali’s Ramadan Run on 17th May, please go to: www.justgiving.com/General300

“There is a light and energy inside of everyone”: Bradford’s shining...