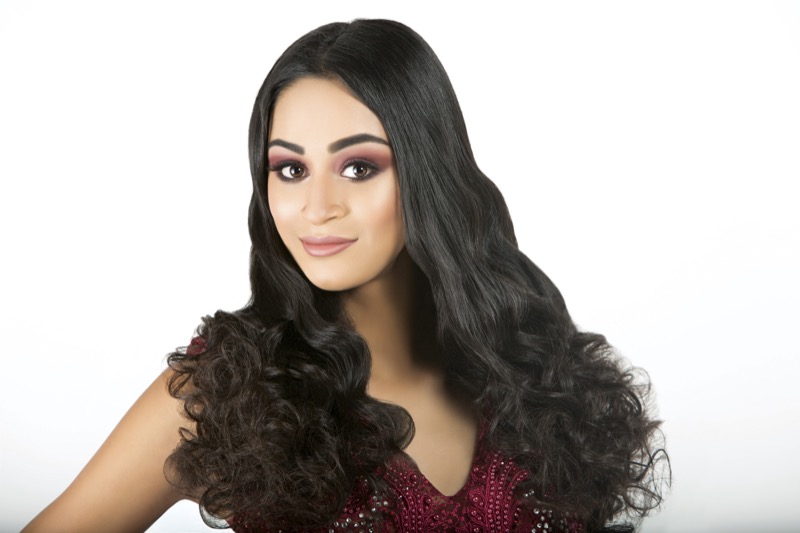 Following her debut feature in Asian Express two years ago, an A-level student from Leeds is putting her best foot forward to compete for the Miss England title.

17-year-old Angel Patel from Pudsey, will go up against three other gorgeous finalists to potentially wear the crown in a special category at the national beauty pageant titled ‘Miss Asian Face of Miss England’ .

The grammar school ‘A grade’ student, first got her taste of success at just three-years-old winning ‘Child of the Year in Pudsey’, and then went on to win ‘Junior Miss Leeds’ in 2016.

Since Asian Express featured her, she’s been using the power of her dazzling crown to fundraise for children’s charities and even travelled to Dharvi, India, one of the largest slums in the country. Not only did she visit a girl’s orphanage there donating everyday essentials including educational and personal items, she also spent the entire day living the life of the slums.

“As for Miss England I was nominated by my friend to sign up. The last few weeks all came as a bit of a shock and surprise to me! It seems that at a snap of the fingers I’ve been in a whirlwind of activities – professional photoshoots, hurried dress fittings and trips to London, all while I was revising for exams at the end of my first year of A-levels,” she laughs.

“The first stage was being shortlisted, I was shortlisted from the top 100 to the top 25,” she explains.

“The second stage was interview round, where I was asked about beauty, brains and my qualities and what difference I would make if I was to win.

“I am quite nervous but at the same time really excited. It’s an opportunity to make new friends again. Whether I win or not, I am proud of my achievement and after the finals I want to organise a fashion show with a difference.”

Proud mum, Nila Patel, who’s been the encouraging force behind Angel says: “What can I say about my daughter that you don’t already know? Not only has she made us proud, but has made the entire Asian community proud as a young woman ready to face challenges and battle stereotypes.

“She has her heart set on Bollywood, let’s see how her journey unfolds. I’d like to thank those who’ve helped us put our Angles outfits and photoshoots together, and of course the Asian Express for their continued support.”