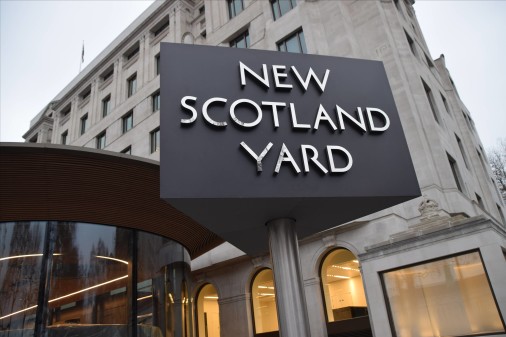 Detectives from the Met’s Counter Terrorism Command are investigating after three officers were injured during a terrorist incident on the Mall.

Just after 20:30hrs on Friday, 25 August, a car deliberately drove at a police van and stopped in front of it in a restricted area on Constitution Hill near Buckingham Palace.

The officers, who were unarmed police constables and from Westminster Borough, got out of the van and approached the car, a blue Toyota Prius.

As they challenged the driver, who was the only occupant in the car, he reached for what we now know to be a four-foot sword which was in the front passenger foot well.

The officers acted very quickly to detain him. During a struggle the three officers sustained minor injuries. The man, who repeatedly shouted “Allahu Akbar”, was incapacitated with CS spray.

Two of the officers were taken by ambulance to hospital with minor cuts and discharged a short time later. The third officer did not require hospital treatment.

The man [A], who is aged 26 and from the Luton area, was arrested at the scene on suspicion of grievous bodily harm and assault on police.

He was further arrested under the Terrorism Act 2000 and detectives from the Metropolitan Police Service’s Counter Terrorism Command are now leading the investigation into this incident. The man remains in custody at a central London police station.

A warrant for the further detention has been granted; this warrant will expire on Friday, 1 September.

The incident is being treated as terrorism but we will remain open minded while the investigation continues.

Commander Dean Haydon, the head of the Met’s Counter Terrorism Command, said: “I would like to pay tribute to the bravery and professionalism of these officers who quickly brought this incident under control. Their vigilance, courage and the swiftness of their response demonstrates how our officers are protecting the public at this time.

“Officers from the Counter Terrorism Command are now investigating and searches have been carried out in the Luton area.

“We believe the man was acting alone and we are not looking for other suspects at this stage. While we cannot speculate on what the man was intending to do – this will be determined during the course of the investigation – it is only right that we investigate this as a terrorist incident at this time.

“I would urge anybody who witnessed the incident or has any information or images that may assist the investigation to contact the confidential hotline on 0800 789 321.”

Commander Haydon added: “This is a timely reminder that the threat from terrorism in the UK remains severe. The police, together with the security services, are doing everything we can to protect the public.

“We continue to urge the public to be alert but not alarmed and report anything suspicious to police confidentially on the hotline – 0800 789 321. In an emergency always call 999.”

At 10:15hrs on Sunday, 27 August, a 30-year-old man [B] was arrested at an address in West London on suspicion of being involved in the commission, preparation or instigation of terrorism and taken into custody.

He has since been released from police custody with no further action.