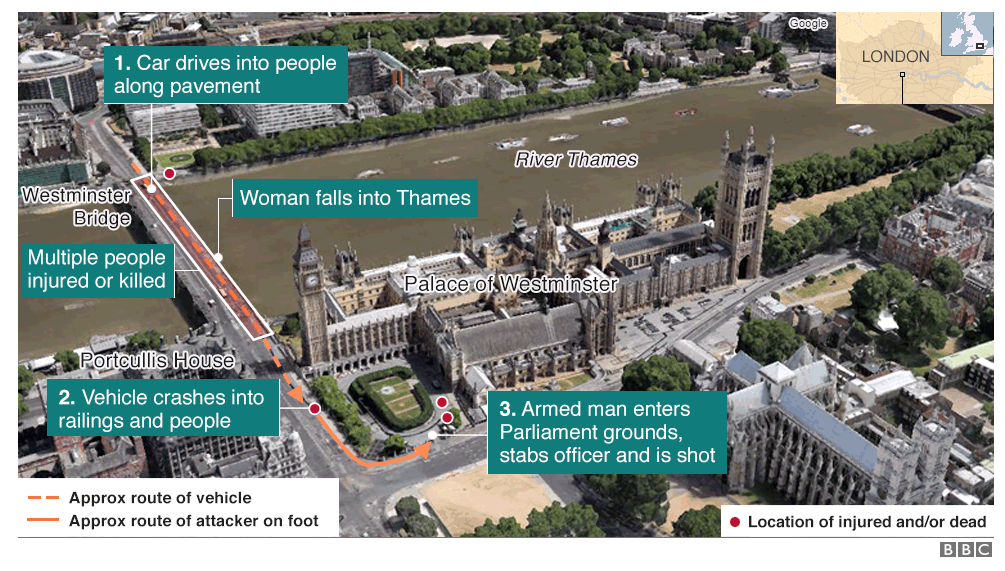 The acting Deputy Commissioner for Scotland Yard has confirmed within the last few minutes that four people are confirmed dead; this includes a police officer, a female pedestrian an the attacker. At least 20 people have been injured in the incident outside the Houses of Parliament in central London.

Police are treating this as a terrorist incident.

Westminster was on lockdown shortly after the attack at 14:40 GMT, after a car rammed into the railings surrounding the Palace of Westminster in Parliament Square, after which one attacker got out and stabbed a policeman with a long kitchen knife.

The attacker was then shot down by armed police.

Emerging video footage from members of the public, show pedestrians running of the panic also he sounds of three shots have been recorded by tourists in the area.

Witnesses described hearing people screaming and seeing bodies scatter as the car is understood to have mounted the pavement just in front of the Houses of Parliament.

It is understood that a large part of the group who were in the hit by the car, were French students, with many of them suffering “catastrophic injuries.”

A “full counter-terrorism inquiry” is under way.

Prime Minister Theresa May is to chair a meeting of the government’s emergency Cobra committee later.

Just last week there was a major counter-terrorism exercise on the River Thames as part of plans to prepare for the worst.

Scotland Yard’s counter-terrorism command, MI5 and, where relevant, other major agencies, are currently trying to establish the background of the suspect.

“Since 14:40hrs this afternoon (Wednesday, 22 March) the MPS has responded to an incident in the area of Parliament Square, and the Senior National Coordinator has declared this a terrorist incident.

“And although we remain open minded to the motive, a full counter terrorism investigation is already underway – this is led by the Met’s Counter Terrorism Command.

“At this stage I will confirm what we know has happened, but I will not speculate.

“We received a number of different reports – which included a person in the river, a car in collision with pedestrians and a man armed with a knife.

“Officers were already in the location as part of our routine policing operation. Immediately, additional officers were sent to the scene and that included firearms officers.

“We are working closely with the London Ambulance Service and the London Fire Brigade.

“I’d like to repeat our request for the public to avoid the following areas:

“Parliament Square; Whitehall; Westminster Bridge; Lambeth Bridge; Victoria Street up to the junction with Broadway and the Victoria Embankment up to Embankment tube.

“This is to allow emergency services to deal with this ongoing incident.

“There is an ongoing investigation being led by the Counter Terrorism Command and we would ask anybody who has images or film of the incident to pass those to police.

“We know that there are a number of causalities, including police officers, but at this stage we cannot confirm numbers or the nature of these injuries.

“Our response will be ongoing for some time as it is important that we gather all possible information and evidence.

“Public safety is our top priority and we are reviewing our policing stance across London and throughout the course of this afternoon there will be additional police and officers deployed across the Capital.

“I would like to ask the public to remain vigilant and let us know if they see anything suspicious that causes them concern and dial 999 immediately.

“The Acting Commissioner Craig Mackey is being treated as a significant witness as he was at the scene when the incident started. Whilst he is not injured, it would be inappropriate for him to talk about the incident at this stage. Ours and his thoughts are with all those involved and those responding to both incidents.