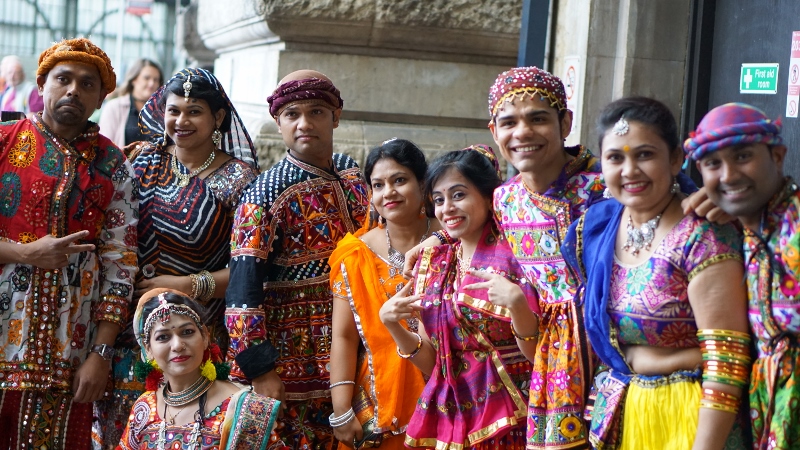 Two community groups – ‘Indians in London’ and ‘Inspiring Indian Women’ – collaborated to bring the joyous festive spirit of Navrati to the heart of the UK on 17th September.

Commuters at Waterloo Station had a feast of colourful Indian tradition just before the commencement of the annual festival, as amateur dancers filled the station with rhythm and dance.

The entire dance was choreographed by Ms Darshini Joshi, founder of “Sanskriti Guru” within a matter of 10 days.

The first performance lasted five minutes amongst continuous cheering and applauses, before a second set was performed to the delight of the crowds.

The whole atmosphere was euphoric and filled up with enthusiastic cheers and colourful display of Indian culture, bringing Waterloo to a standstill.

This performance was an act of ‘Unity in Diversity’ that exists in one of the largest democracies in the world. The participants were not just Gujratis, but rather from all the states of India including Marathi, Bengali, UP, Marwadi, Punjabi, Malayali, Kannada etc.

A spokesperson for the dancers said: “Dance and music have no language and this was proven yet again at the iconic historic station of London Waterloo.

“It created beauty and lit up souls, as London awaits the festive season of Navratri to begin.”

The Indians in London Group, established 2004, is an independent, not-for-profit platform to connect with the Indian Diaspora in the UK, on social, cultural, economic and charitable matters.

Inspiring Indian Women Group, a not for profit platform, was started with the vision to reach out and inspire each other with their success stories. It not only aims to help and promote Indian culture across the globe but also provides a healthy platform for our Indian women to motivate and support others.