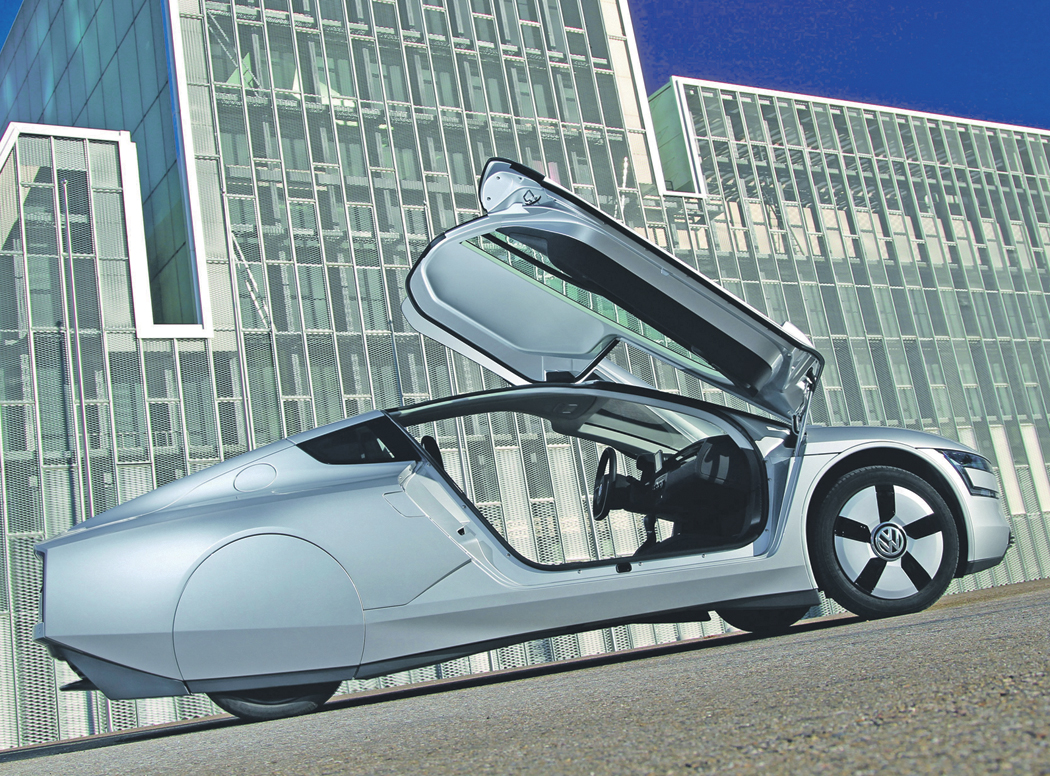 The world’s most fuel-efficient hybrid car, the Volkswagen XL1, will go on display in the Design Museum in London alongside other examples of design excellence and Designs of the Year award nominees from a range of disciplines from this week until 25 August.

Now in its seventh year, the Designs of the Year exhibition gathers together cutting-edge innovation and original talent, showcasing the very best in global Architecture, Digital, Fashion, Furniture, Graphic, Product and Transport design.

The Volkswagen XL1 features in the Transport category, and was nominated for the exhibition by author and automotive design and technology expert, Andrew Nahum, whose publications include ‘Fifty Cars That Changed The World’.

Designed by a team led by Klaus Bischoff, Head of Design for the Volkswagen brand, the XL1 is a limited series production two-seater car that explores the limits of energy efficiency for a road-legal production vehicle.

The design brief for the XL1 was to produce a ‘one litre’ car – that is to say, a car that uses one litre of fuel per 100 km, equivalent to 282 miles per gallon.  The resulting vehicle uses just 0.9 litres per 100 km, or 313 mpg, and this high mpg figure correlates to a very low carbon dioxide emissions value of just 21 g/km.

To achieve this fuel consumption figure, the XL1 was aerodynamically optimised, adopting the classic ‘tear drop’ shape and utilising innovations such as removing traditional wing mirrors and replacing them with small cameras called e-Mirrors which transmit exterior images to interior displays. With a drag coefficient of 0.189 the XL1 can maintain 100 kmh on a level road in still air using just 8.4 PS.

The super-innovative XL1 looks like a vision of the future, while its drivetrain melds a two-cylinder 48 PS 800 cc diesel engine with a 27 PS electric motor.

Power is served through a seven-speed triple clutch transmission.  Like any good supercar, it is also low (just 1,282 mm high) and features scissor-opening wing doors.  The XL1 is ‘handcrafted’ using small series production processes at Volkswagen’s Osnabrück factory in Germany.  For the required combination of lightness and strength, its body is made largely of carbon-fibre reinforced polymer.  Approximately 30 XL1 vehicles are expected to find homes in the UK.

The Designs of the Year exhibition at the Design Museum is a reflection of everything that is current and exciting in the world.  Alongside the Volkswagen XL1, it features, among other items, Kate Moss’s favourite app, a floating school in a Nigerian lagoon, friendly lamp posts and a mobile phone you can build yourself.  Exhibits come from a variety of sources including international design stars such as Zaha Hadid, David Chipperfield and Miuccia Prada, as well as crowd-funded start-ups and student projects.

Visitors to the Design Museum will be able to pick their favourite design from the exhibition.  New for 2014 is the Social Vote which sees two nominations fight it out each day through the exhibition’s online platforms, and broadcast to over one million of the museum’s Twitter and Facebook followers.

For more details on the XL1, please visit www.volkswagen.co.uk. To find out more about the Designs of the Year exhibition and to purchase tickets, go to www.designmuseum.org.