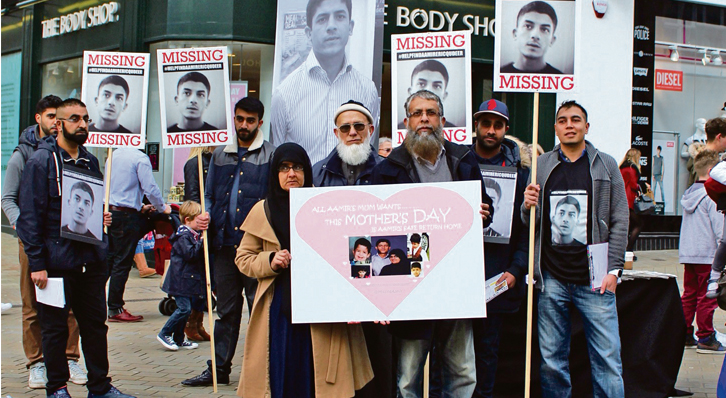 The relatives of a missing 21-year-old from Leeds, have taken to the streets with a campaign calling for members of the public to step forward if they have any information of his whereabouts.

The family has recently expressed their disappointment to the Asian Express on how they feel the police has dealt with raising public awareness of Aamir Qudeers’s disappearance, which was over five weeks ago.

Last week Aamir’s distraught parents Zatoon and Abdul Qudeer, of Scott Hall Road, said that his disappearance was completely out of character and that they are a very close family.

Making an emotional plea at a press conference held on Wednesday March 26th and unable to control her tears Mrs Qudeer made a public and direct appeal to her son. She said: “We don’t know the reason why you left and disappeared as you did, but whatever it is we can sort it out as a family. Please come home, your dad and your sisters and I miss you.”

He had missed lectures shortly before he went missing, but there were no other signs that he was unhappy or in trouble. He left his flat in Forster Hall student accommodation in Great Horton Road at 1.15pm.

He was last spotted in Leeds boarding a train to Liverpool and the last sighting of him on CCTV was at about 7pm that evening leaving the city’s Lime Street station. Nobody has seen or heard from him since.

Aamir’s aunt (khala) Abda Ali, speaking exclusively to the Asian Express, states that she is hugely concerned by the way the police have responded to her queries on the case and lack of support in generating a nationwide plea.

Abda, who is the General Manager Forth Valley CCTV at Police Scotland, is questioning why extensive national media coverage has not been generated by the police press officers.

“I’m very worried that Aamir has been stereotyped by the police as ‘just another Asian lad’, and that him being missing has not being taken as seriously as it should have been right from the start.’”

Abda also revealed that both Aamir’s mobile devices have been switched off since his disappearance. Furthermore his bank and email accounts have not been accessed.

“As you can imagine the family is going through turmoil. Aamir also missed celebrating his 21st birthday on 3rd March, it seems very unusual for a young person to miss such a milestone in their life.

“My sister (Aamir’s mother) is falling to bits with worry and Aamir’s sisters Naila, Zakiya and Naimah just want to find out where their brother is and hope that he is safe and well.”

Though it is known that the student’s phone was accessed for one email shortly after he arrived in Liverpool, the police have said on following up this lead: “This line of enquiry established that the phone was using an email provider which does not give the geographical location of an IP address. As such we are unable to pursue this further.”

Upon being asked by Asian Express about how the police force deals with missing persons cases and how many officers were actively working on trying to find Aamir, the police answered: “Each case is considered on its individual circumstances. There is no set protocol.

“Officers are tasked to the investigation depending on the demand placed on resources at the time, so it is impossible to give an exact figure of how many officers are working on the case. It is however, being overseen by a Detective Superintendent and has a single point of contact at Detective Inspector level.”

Aside from a dozen articles over the last four weeks in mainstream press, very little has been covered about Aamir’s disappearance.
“I’ve had to generate the interest of BBC Leeds myself, and managed to get some time on air and appeal for anyone that may have any information to get in touch with the police,” says Abda.

“In a time like this when a family is out of their minds with worry about a missing loved one, trying to grab the national press’s attention to try and help is not what they should have to go through.”

Aamir has been a Leeds and Harrogate student all his life prior to joining the University of Bradford. His aunt says that he is extremely close to his family and usually if he has gone anywhere he would notify someone in the family.

Since starting university in September last year, Aamir would come home every Friday and then be dropped off back to his Halls on Sundays.

The Friday before he disappeared and spent the weekend with the family, as usual, and the family say that Aamir was completely normal.

When he left to go back to Bradford on the Sunday, he said ‘See you on Friday.’

Still unknown why Aamir may have travelled to Liverpool, the family say that though they have relatives scattered across the country, there is no connection with the city.

Detective Inspector Neil Benstead of Bradford CID, who is leading the search for the student said: “A month has now passed since Aamir went missing from Bradford.

“We remain concerned for his welfare and are again appealing to him or anyone who may have seen him, in Merseyside or Yorkshire, to please make contact and reassure both us and his family that he is okay.

“His disappearance is out of character and his lack of contact is causing serious concern.

Anyone with information or any possible sightings of Aamir can contact police on 101 or Missing People on 116000.