Fascist Marine Le Pen may have lost the French presidential election, say anti racists, but she remains a huge threat and Macron has legitimised her politics through his use of racism and Islamophobia.

Anti racists vow to continue to build the mass movement against racism and fascism. The exit polls this evening have announced Le Pen at 42 percent and Macron on 58 percent.

Le Pen associates with the fascist and racist populist right across Europe from Salvini in Italy and Orban in Hungary to the AfD in Germany.

Tens of thousands protested across France against Le Pen, anti racists say, show the possibilities of creating a mass opposition to Le Pen and the fascist right.

“She represents racism, Islamophobia and her party is rooted in the fascist Front Nationale.

“But it is equally dangerous that she looks like she was the 42 percent of the vote. It means that her form of politics is poisoning French politics. She is with every far right figure in Europe.

“We must understand the Nazis and the horrific warning from history that although they change the language and try and fix the brand, they still represent a major danger to democracy and a threat to black, Muslim, Jewish and LGBT+ plus communities.

“It is essential that we support the movements that are challenging racism in France to make sure that the threat of the racism, fascism and the far right is challenged.” 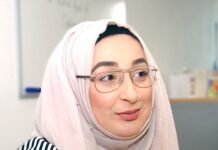 100th birthday celebrations for the man upon who’s shoulders his family...

Popping! Meet the 27-year-old who quit her job at KPMG to...