“Those of us who take family visits to the ‘motherland’ can often miss or overlook the areas of risk associated with hepatitis C.”

• The prevalence of hepatitis C is higher in British South Asian communities (1.1%) compared to the wider UK population (0.2%) and it is estimated that as many as half of people living with the disease are unaware they have it.

• Hep C, Ki? is a new campaign by Gilead Sciences and The Hepatitis C Trust, with the support of NHS England, that uses comedy to breakdown barriers of stigma and fuel conversations around hepatitis C and its associated risk factors in British South Asian communities.

• The campaign urges those who may have been exposed to the virus either in England or when travelling abroad to speak to their healthcare provider to see if testing is currently available in their local area.

As part of their commitment towards elimination of hepatitis C in England, Gilead Sciences have created a first-of-its-kind collaboration with leading British South Asian comedians, The Hepatitis C Trust and the support of NHS England.

Their campaign, Hep C, Ki?, uses an unconventional approach of comedy to breakdown barriers of stigma and fuel light-hearted conversations about South Asian idiosyncrasies, that intersect with the risk factors for contracting hepatitis C.

Hep C, Ki?, which broadly translates in colloquial terms from many South Asian languages as Hep C, What?, is built on insights from a survey of 300 people from British South Asian communities, as well as input from healthcare professionals and regional hepatitis C Operational Delivery Networks.

At the heart of the campaign is the comedy narrative written and performed by prime-time comedians Eshaan Akbar, Sukh Ojla and Ali Shahalom (Ali Official).

The comedians filmed a series of stand-up and chat sequences exploring a range of topics from travels to their ancestral homelands, family attitudes to health and their eclectic mix of home medicines and remedies.

Ali Official commented on his involvement in the campaign: “I wasn’t aware that five times more British South Asians have hepatitis C than the wider UK population. Those of us who take family visits to the “motherland” can often miss or overlook the areas of risk associated with hepatitis C – be it unsanitised needles at a hospital, or razors at a barber.”

“As a creator from a minority background, I felt compelled to lend my voice to something that could help my community.

“Humour can have such a powerful way of making you see things in a different light and I’d like to think this campaign has delivered a message in a unique way that hasn’t been explored before and encourages people to get tested.”

Individuals born in countries such as India, Pakistan and Bangladesh, along with those who regularly visit or spend extended periods of time in these countries, have a higher risk of contracting hepatitis C.2 The number of people testing positive for hepatitis C is 1.1% in British Asian communities compared to 0.2% for the wider UK population.

Risk factors for hepatitis C can include common everyday practices when overseas, such as receiving medical, dental or cosmetic treatment if equipment such as needles are not sterilised properly.

Professor Graham Foster, Professor of Hepatology at the Queen Mary University Hospital and Clinical Chair of NHS England’s hepatitis C elimination programme, said: “Hepatitis C is a treatable virus, which is why it’s so important to share relevant information about testing and treatment with the British South Asian community, as well as everyone who can benefit from expert care and support.

“By using comedy as a vehicle to get this message out, we can provide an accessible way to talk about this very important public health issue and in turn take steps towards hepatitis C elimination, and ultimately save lives.”

The full videos are available at www.hepc.co.uk, along with more information about the campaign. 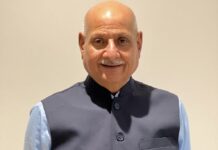 A day in my life with type 2 diabetes: Balance is key to staying happy and healthy

A day in my life with type 2 diabetes: Finding a routine that works for me

Know the symptoms of a heart attack – cardiologist says ‘it’s...

Cooking up a storm! Keighley grandma dishes out thousands of free...